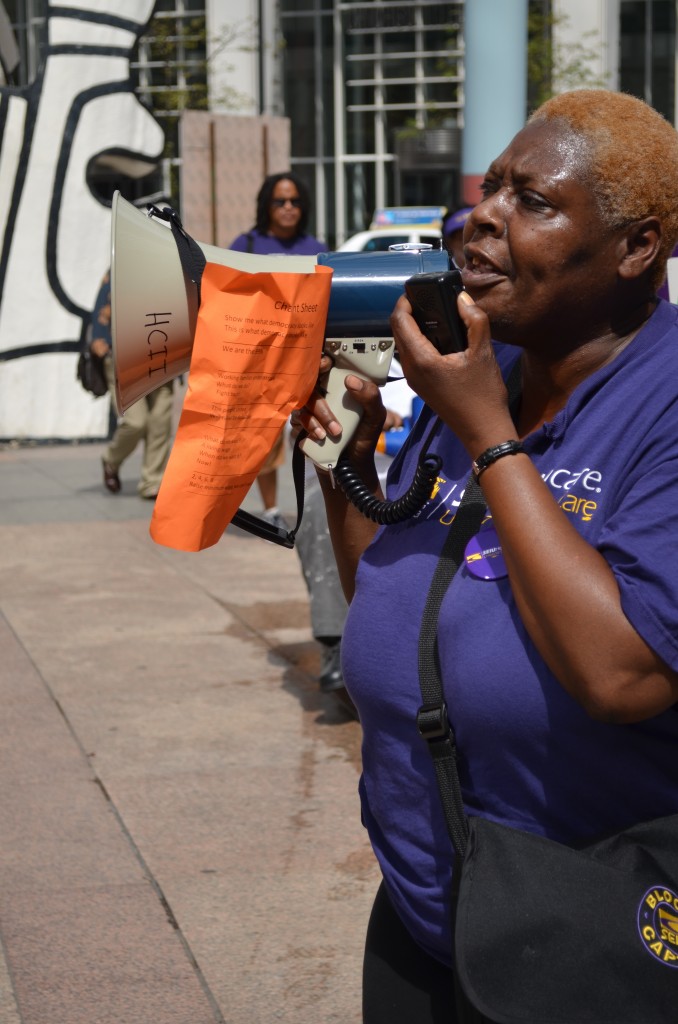 On July 24th, Rose Crawford, Denise Brown, Barbara Rosser, and Minnie Lee (pictured left) spoke at a rally at the Thompson Center in downtown Chicago about why home care workers need a “living wage.” The four women who work at the Department of Rehabilitative Services as personal assistants, called DORS-PAs, spoke about their struggle trying to care for their own families while making poverty level wages.

DORS-PAs support and enable adults to live independently in their own homes without having to be placed in nursing facilities or institutions. The adults whom the PAs care for, called “consumers,” often suffer from major health issues, decreased mobility and live in poverty.

Check out two videos from our “living wage” rally as well as our profile of Barbara Rosser below.

Barbara Rosser Prayed for Her Consumer: “May the Angels Take You Home”

Barbara Rosser’s only consumer whom she cared for the last two years just passed away last week.  She had been in hospice care since early May.  Barbara hoped that in the last days of her consumer’s life she was not in any pain.  She prays for her consumer’s family that they will find comfort amidst their loss.

Barbara became a DORS-PA quite randomly. A friend of Barbara’s asked if she would check-up on a woman from their church.  “When I first saw her she told me she was hungry and had not eaten any food all day. She said that her legs were so badly swollen that it was painful for her to stand up and even heat up some food. I jumped up and said we’re gonna get you something to eat,” Barbara said.

Barbara then organized the woman’s dozen or so pill bottles. This frail women had serious health issues, including diabetes, and heart and circulatory problems. “After dinner I started cleaning up her place, putting away clothes and sweeping just because I could see she could use the help.”

This woman pleaded with Barbara to come and help take care of her and to become her personal assistant. “I didn’t even know what a DORS-PA worker was,” said Barbara. She knew it would be hard work, but said yes because she knew she could really help this woman.

“I wouldn’t have traded my two years with her for anything. She taught me a lot about perseverance,” said Barbara. “Just like my fellow PAs, I’m a caregiver to my very soul. I help people everyday. It’s who I am as a person.”

Even though DORS-PAs don’t make that much money and have to constantly scrape by – like deciding which bills to pay each month –they help their consumers have a better life.

When Barbara’s hours got cut back from 32 hours to 25 hours and then on down to 20 hours she continued to care for her consumer several hours per week even though she wasn’t getting paid for it.

“My consumer needed more hours of home care which she wasn’t getting. But she swore she would never go to a nursing home,” said Barbara.  “She said she wouldn’t make it if she left her home.”

According to Barbara, one night in late April when her consumer was alone, she slipped into a diabetic coma. Neighbors called 911 to rush her consumer to the hospital where she then suffered from heart failure. Days later she was moved into hospice as Barbara braced herself for the inevitable loss.

“I just remember praying, ‘May the angels take her home,’” said Barbara. “We, as personal assistants, simply need more hours to care for our consumers because they need the vital care and service that we provide.”

Barbara Rosser will tell you it is physically and mentally demanding to be a home care worker. But what she and her fellow PAs want is to be recognized and respected for the hard work that they do and the vital care they provide for adults who cannot completely care for themselves.

“All we are asking for is fairness. We just want to make a fair and living wage while we do our work. Nothing more, nothing less.  I will always be a caregiver. I just want to provide a decent life for myself and for my own children at the same time.”