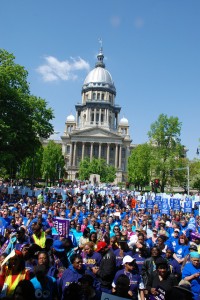 (August 3, 2012, CHICAGO) – To advance the cause for economic equality and opportunity, the Service Employees International Union Illinois State Council announced its endorsements for the upcoming general election on November 6, 2012.

Representing more than 170,000 workers, the state’s largest labor union put its backing behind candidates who have demonstrated strong voting records on issues related to income equality, affordable housing, consumer protections, access to affordable health care and other needs that help keep working families and their communities stable, healthy and safe.

“Each of these candidates has championed the needs of the working families united in SEIU and the millions of people they serve every day as home care and child care providers, public employees, medical professionals, security guards, janitors, first responders and social service workers,” said Tom Balanoff, President of the SEIU Illinois State Council.

“The candidates that we endorsed today have demonstrated a commitment to working families and we’re proud to stand with them in their upcoming races,” said Keith Kelleher, Vice President of the SEIU Illinois State Council. “Our state and our country is at a major crossroads. This November, the fundamental question will be whether we elect leaders who believe in shared prosperity, economic and tax fairness, and who will fight to rebuild and strengthen working and middle class families from the ground up.”

“SEIU members have a proven track record of helping to elect candidates who fight for stronger communities and against growing income inequality. We look forward to continuing that trend,” said Christine Boardman, Treasurer of the the SEIU Illinois State Council.

The SEIU Illinois State Council does not issue endorsements in uncontested state legislative elections where there is an incumbent officeholder.

The candidates earning the endorsements were: