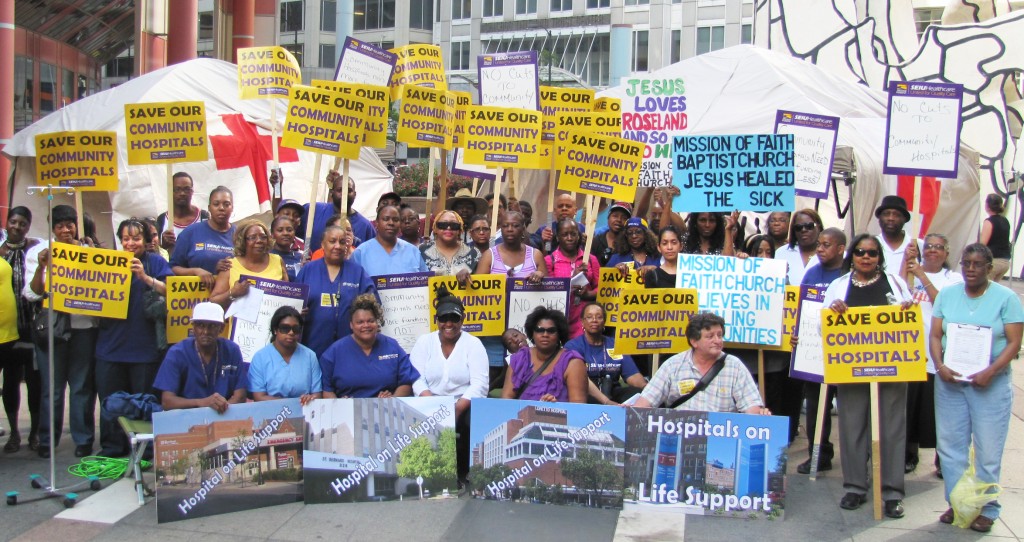 CHICAGO (May 24, 2012)—It could have been a scene from “Mash”, the comedy-of-errors television series where soldiers pitch tents to care for their sick and injured. Only this tent city was set up on the plaza of the Thompson Center to demonstrate the serious and devastating impact proposed Medicaid cuts would have on community hospitals and their under- and un-insured patients.

Hospital workers, community residents and healthcare advocates marched, chanted and gave speeches about the impact cuts would have on their lives. The sound of sirens echoed between City Hall, the Thompson Center and surrounding buildings as workers performed skits of mock medical emergencies where patients were treated outside the tents.

“We’re here to tell the story of the small, community-based hospitals that don’t have a lot of money and their patients who have little or no healthcare insurance,” said Tina Tinsley, a worker at Roseland hospital. “Simply put, untreated illnesses would increase, diseases would spread faster and more people would die.

Called community healthcare “safety nets,” hospitals like Roseland and St. Bernard on the city’s south side and Loretto and Mt. Sinai/Schwab 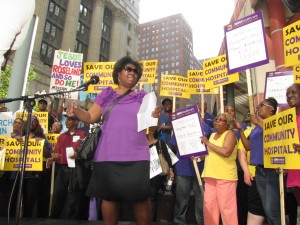 Rehabilitation Center on the west side operate on slim financial margins and provide care for some of the neediest residents of the city. A large percentage of patients rely on Medicaid to cover the cost of their care, and the hospitals’ life lines are connected to sustained and full reimbursement for the care. Gov. Pat Quinn had proposed to cut $2.7 billion from Medicaid.

Mt. Sinai and St. Bernard, for example, receive more than 50 percent of their total revenue from Medicaid reimbursements. In addition, millions of dollars are unrecovered because of the charity care these hospitals perform.

Workers and allies said their message to Gov. Quinn — whose office is on the 16th floor — is that cutting Medicaid, Medicare and other healthcare funding would only push healthcare costs upward. Instead, they urged the governor and legislators to pass a cigarette tax to increase revenues. Cuts would force residents of these neighborhoods to travel greater distances for medical care or overcrowd the emergency rooms of other public and private hospitals, rally, participants said.

“Our hospitals not only perform life sustaining services, they also are sources for employment for people in the community,” said Sansaree Bronson, a worker at Mt. Sinai hospital. “Any cuts to our already limited services would be devastating. We trying to prevent the creation of ‘healthcare deserts’ in our communities where people have no access to services.”

Voices of hospital workers were heard. There were no rate cuts for safety-net community hospitals and a $1 pack cigarette tax passed in the state legislature to increase revenue.