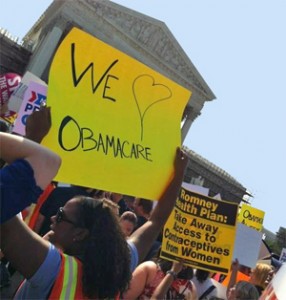 The high court’s ruling ensures that the benefits of this landmark health care reform, which has already made medical care more accessible and affordable for millions of Illinois residents, will continue to multiply as more of the legislation’s provisions go into effect in coming years.

For 85 percent of Americans who already have health insurance, the law has and will usher in a variety of popular improvements in their coverage.   Insurers will be barred from denying coverage for preexisting conditions.  Young adults under the age of 26 are entitled to join their parents’ health insurance plans.   Seniors have received desperately needed support to pay for costly prescription drugs.

And for those who are currently uninsured, the days when they are forced to use their local hospital’s Emergency Room as the functional equivalent of a primary care physician will soon come to an end.

Now that the court – in an opinion authored by its conservative Chief Justice – has given its seal of approval to this law, the time has come for Republicans to put the economic interests of working families ahead of the political interest of their party.  The time has come for a bipartisan commitment in Washington to fully implement the Affordable Care Act, so we can help cure the ailing U.S. economy.

We call on Illinois’ Republican Congressional delegation to join in that commitment.  Any energy spent on a futile and time-consuming effort to repeal the Affordable Care Act will only divert attention away from the issue foremost on the minds of Illinois residents:  our state’s economic recovery.

And the Affordable Care Act will be instrumental in aiding the state’s economy by making health care more affordable and accessible.  For instance, in Illinois alone, the law as already generated the following rewards:

These statistics provide convincing evidence that comprehensive health care reform was paying off for Illinois residents.  But the most compelling proof is embodied in the countless stories to be found within the health care system itself.  The members of our union encounter those stories every day, because they represent the front lines of the health care system.

As home care workers, our union members help lower spending on nursing home care and hospital care both by helping seniors and people with disabilities live independently and by detecting medical problems before they result in frantic trips to the emergency room.  And as employees of Chicago’s many safety net hospitals, our union members see first-hand how low-income families without access to affordable health care are forced to seek costly treatment in Emergency Rooms for problems that could have been resolved through routine doctor’s visits.

Moreover, some of our members are, themselves, low-income workers who cannot afford private health insurance, and many of them have had to withstand serious and chronic illnesses without the availability of proper care.  There is perhaps no more glaring indication of the need for viable health care reform than the fact that the front-line workers entrusted with providing that care, don’t have access to it themselves.

For all these reasons, we applaud the Supreme Court today for its historic decision protecting the Affordable Care Act.  We urge Republicans to recognize the broad support in Illinois and across the country for the popular reforms contained in the law.  And we thank President Obama for making good on his promise to bring more affordable health care to all
Americans.