This month, our members fought for justice for immigrants, making our voices heard all the way from Alabama to Chicago.

Our members flew south to join other civil rights leaders, union members, and activists in commemorating the anniversary of the 1965 Bloody Sunday march from Selma to Montgomery, Alabama, which resulted in the passage of the Voting Rights Act. This time around, we marched in protest of HB 56, Alabama’s racist, restrictive, and regressive immigration law, widely regarded as the strictest in the country to date.

“My grandmother went to one of the first schools to be desegregated in the South,” said Clarice Evans, a hospital worker in Chicago. “They were afraid, but they kept going to school every day. I thank God that I didn’t have to go through it, but I’m glad I was able to do something for the kids that are scared to go to school now because of this racist law.”

In addition to allowing police to racially profile anyone they suspect of being undocumented, requiring them to carry their immigration papers with them at all times, one section of HB56 requires that schools check the immigration status of their students. The Monday after HB56 was passed, the percent increase in Latino children absent from school shot up 80 per cent. 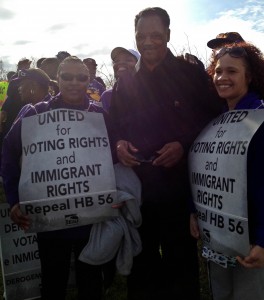 “Yes, I kept up,” Freddie said. “To meet Dick Gregory and other leaders and get an autograph from the 100-year-old woman who was in the original 1965 march was an experience I’ll never forget.”

Back in Chicago, members marched on Fletcher Jones Honda on Clark Street to support a repeal of HB56. Honda, one of the biggest employers and investors in Alabama, relies on Latinos to purchase their products, but have remained silent about this anti-immigrant law.

Along with more than 75 members and supporters, Arise Chicago director Rev. CJ Hawking invoked the memory of the 1965 marches as well as giving a shoutout to our members in Selma before we set off to protest.

“Honda decided to build a plant in Alabama, and it has remained silent about house bill 56. They need to come out by tomorrow, when our folks reach Montgomery, and they need to tell people that house bill 56 needs to be repealed,” she said.

See our members speak out at Fletcher Jones Honda: