This month, I was honored to march from Selma to Montgomery, Alabama, for civil rights, immigrants’ rights, and justice. Along with our brothers and sisters in Alabama and supporters from across the country, we marched to commemorate the 47th anniversary of the historic 1965 march that led to the passage of the Voting Rights Act and so many other revolutionary civil rights laws passed in the heyday of the movement. 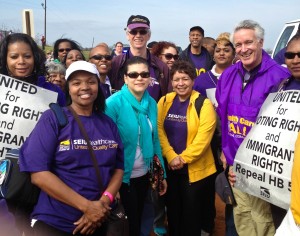 Keith and members getting ready to march

Our union was well-represented in Selma: we had homecare workers from southern Illinois and Chicago, child care providers from the south suburbs, and healthcare workers from our hospitals and nursing homes marching together. Black, white and brown, we marched united against new racist, discriminatory laws in Alabama aimed at recent immigrants as well as voter suppression laws which were written only to prevent African-Americans and other low and moderate income people from exercising their right to vote.

Our path honored the heroes of the past as well as the freedom fighters of today. We began at the Memorial for Viola Liuzzo [link], a white volunteer transporting civil rights marchers on the original 1965 march. The KKK forced her car off the road and killed her with a shotgun. Her passenger, an African-American marcher, survived.

We were privileged to be introduced to one of the original marchers. At more than 100 years old, she marched alongside us in her wheelchair—what an inspiration!

I was proud of the endurance and strength of our members, several of whom were well into their 50’s, 60’s and even 70’s. They marched several miles a day, for days in a row, without complaint. It reminded me of the marcher during the historic 1956 Montgomery bus boycott who said of her effort, “My feet may be hurting, but my soul is rested.”

Even though we were in the heart of the Deep South, fighting new racist anti-immigrant legislation and attacks on the rights of people of color and all low- and moderate-income Americans to vote, we felt hopeful. There we were, hundreds of us, black, brown, Asian, and white; senior citizens and young people; members of unions, community organizations, and immigrant rights groups; united and fighting back against racist, anti-immigrant and discriminatory voting laws and right-to-work-for-less laws [link] that threaten our rights on the job . We were being escorted by Alabama state troopers: the same authorities who might have harassed and beaten us 50 years ago were now protecting us.

We know have a lot of work ahead of us. We have to be vigilant in preventing racist and regressive laws[link to anti hb56 site] from unraveling the hard-won advancements that our brothers and sisters died for and keep fighting for fairness and equality in our jobs, communities, cities and state capitols.

But little by little, things are truly changing for the better. Together, we’re marching forward to a better world for all of us.