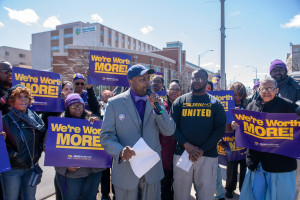 The Threat of Closure is Yet Another Example of the Hospital Industry’s Complete Lack of Concern About the Loss of Healthcare Access for Black Communities in South Suburbs, Economic Devastation, and Loss of Nearly 1,000 Jobs

(June 15th, 2019, CHICAGO)—Metro South Medical Center in Blue Island, Illinois announced that it would close its doors in November 2019 if the hospital’s parent corporation, Quorum Health Corp., can’t find a buyer to take over the facility’s operations.

The potential closure would devastate the Blue Island community and surrounding south suburbs as patients would lose access to healthcare, the risk of another life-saving emergency room being shuttered, and the loss of up to 1,000 jobs and small businesses that anchor the community and region.

“Our hardworking and dedicated SEIU members, patients, families, and the south suburban community of Blue Island deserve a quality, thriving, and accessible hospital and ER – and we intend to keep it that way.

“We pledge to work to build a large coalition of stakeholders, including workers, elected officials, small businesses, and faith and local civic leaders to keep the hospital open and to find a just solution, including finding another mission-based hospital system to provide the vital services the community needs.

“Similar to the community fight to stop West Lake Hospital from shutting down its operation as a safety net serving families in the Melrose Park and Maywood area, the hospital industry is now targeting another community, this time in Blue Island, with the threat of disinvestment and massive job losses.

“SEIU members and hospital workers across the entire Chicago region are right to call a ‘Code Blue’ on the entire hospital industry for their callousness, lack of empathy and greed to maximize profits over patients and providing quality healthcare. The hospital industry has billions of dollars of revenue flowing throughout the system, yet it continues to spin the public that hospitals are broke.

“The industry simply does not care about the devastation and disruption they inflict on families and communities, on top of their agenda to pay frontline hospital service workers poverty level wages, make health insurance unaffordable, and deny workers the right to join a union and have a real voice on the job.

“We see this fight to keep Metro South Medical Center open as an opportunity and urge all hospital workers and community stakeholders to step up and lead on this critical issue.

“We also call on both the state and county to ensure that all communities have access to acute care hospitals and take concrete steps to make that a reality.

“Lastly, it’s clearly time for state lawmakers to claw back the power, influence and clout of the Illinois Hospital Association and enact legislation to empower the Hospital Review Board with more authority to regulate the industry and decide which hospitals can open and close and demand real accountability.”