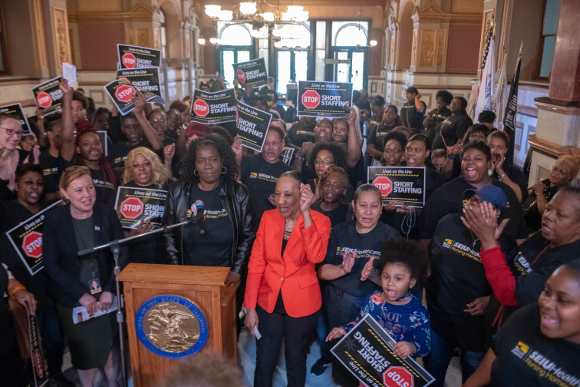 On the closing days of the legislative session state lawmakers approved a series of sweeping reforms to give authority to the Illinois Department of Public Health, which regulates nursing homes, to level penalties and fines on facilities that don’t provide adequate and safe staffing.  State lawmakers also approved $70M in increased Medicaid funding to nursing homes to meet the 2010 staffing requirements.

That successful vote, in addition to nursing home workers lobbying the bill non-stop in concert with AARP Illinois, created enormous momentum and pressure on the General Assembly to act. Senate Bill 1510 was passed as part of the Budget Implementation Plan found in Senate Bill 1814.

This legislative package and language will finally enforce the minimum staffing law passed by the legislature in 2010 after news reports and investigations revealed rampant cases of neglect and abuse in Illinois nursing homes.

“This victory to stop short staffing in Illinois is nothing short of historic for our state’s nursing home workforce.

“We take pride in the fact that nursing home workers are committed to fight on behalf of all seniors, residents, and families. Everyone understands that the nursing home workforce are not only dedicated caregivers, but also strong advocates for justice and quality care.

“We applaud and deeply appreciate our nursing home member leaders, stewards, and activists who fought so hard to make this day a reality. Their tenacity organizing fellow workers, going to lobby days in Springfield every week, holding rallies and press events is proof that when we fight we win!

“Nursing home workers deserve a safe and secure work environment where caregivers are not constantly overburdened, exhausted, and stressed trying to care for sometimes up to 30 or 40 residents, if not more, at a single time. They absolutely deserve a fair and living wage, affordable healthcare, and a real voice on the job.

“We thank our partners at AARP Illinois for their leadership on this issue and for the resources and commitment they brought to the table.

“Our Union is committed to making sure the short staffing law is properly enforced. And with this major victory behind our backs, we are passionate about making sure the nursing home industry respects the hard work and service that caregivers provide every day.”