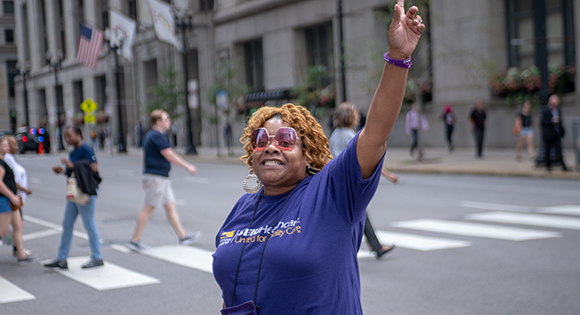 We are happy to announce that we have reached an agreement with the Pritzker administration over the implementation of 48-cent raises and the release of back pay for Illinois Personal Assistants! Plus, the administration has agreed to stop enforcing the dangerous overtime policy until we are able to reach agreement over a new policy, taking big steps forward in reversing attacks from former Governor Bruce Rauner.

This victory would not be possible without the thousands of Personal Assistants and people with disabilities who took action through our union. We look forward to returning to the bargaining table with a new governor who has followed through on an important commitment to our members so we can continue to rebuild the Home Services Program for people with disabilities and improve our jobs.

We have had to fight so hard for everything we have won and this victory is no different. Today marks another example of what we can achieve when we stick together.

Mark your calendar and plan to join us for an important telephone town hall meeting this Thursday, March 21 at 7 p.m. to learn more about this agreement and to hear about our next steps as we return to the bargaining table to negotiate a new contract.