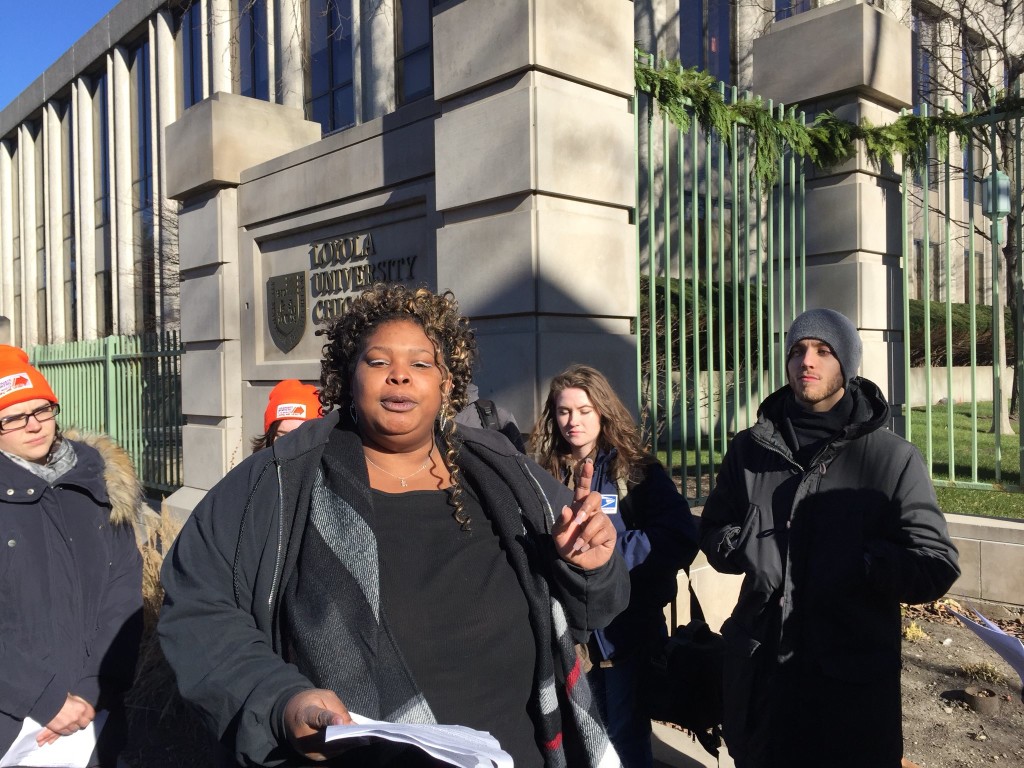 December 6th, 2017: Lashanda Dixon, a nursing home worker at Alden Lincoln Park Nursing, speaks outside of Loyola University in Chicago about the Republican “tax scam” which will slash Medicaid and Medicare funding for working working families and seniors.

(December 6th, 2017) — Read the full text of Lashanda Dixon’s speech outside of Loyola University in Chicago about the Republican “tax scam” which will slash Medicaid and Medicare funding for working working families and seniors. Lashanda works at Alden Lincoln Park Nursing Home. (Watch videos of the action here).

I am proud of my work to serve others and speak today on behalf of my sisters and brothers at my Union, SEIU Healthcare Illinois.

The Republican tax bill is nothing but a complete SCAM!

Every single working person in this country is being deceived by the Republican Party about this horrific and irresponsible legislation that will HURT working families.

How is it possible that the Republican tax bill will force working people to PAY MORE IN TAXES, and CUT Medicare by $25 billion next year alone just to give the very rich an unnecessary tax cut!

Why are seniors, and low-income families, and college students, and healthcare workers just like myself the ones who are being hurt and told to sacrifice?

My friends, we the American people are being conned by the Republicans in Congress and by President Trump.

And yes, that includes Congressman Peter Roskam, and the entire Illinois Republican delegation, and of course, billionaire Governor Bruce Rauner.

I challenge Gov. Rauner and Congressman Roskam – no, I DARE them! — to show their faces as a community forum and explain their support for this tax scam that will hurt seniors and working families.

Because in order to pay for this tax scam the Republicans will slash our healthcare. That means 13 million people will lose their health insurance according to the Congressional Budget Office.

Virtually everyone’s health premiums will go up too. Premiums for people over 50 will increase up to $1,500 per year because of this health repeal according to AARP.

How in the world does this make any sense?

Why does our billionaire Governor, Bruce Rauner, deserve an estimated $300 Million tax cut to escape paying any inheritance taxes along with other tax breaks that benefit him?

As someone who is dedicating my work to improving quality and affordable healthcare we should be EXPANDING access to Medicare and Medicaid and provide living wages to healthcare workers– not slashing these programs.
We should be demanding that the richest 1% pay their fair share in taxes and invest in our communities to create good pay jobs – not giving tax cuts to millionaires and billionaires.

We need to lift the crushing burden of student loan debt off the backs of our college students — not saddle them with more loans to give tax breaks to large corporations.

If Donald Trump and the Republican tax scheme is enacted, we will absolutely not forget this betrayal to working families.

And to the politicians who sided with the richest 1%, and large corporations who fleeced our communities, there will be a reckoning and accountability in next year’s elections at the polls.