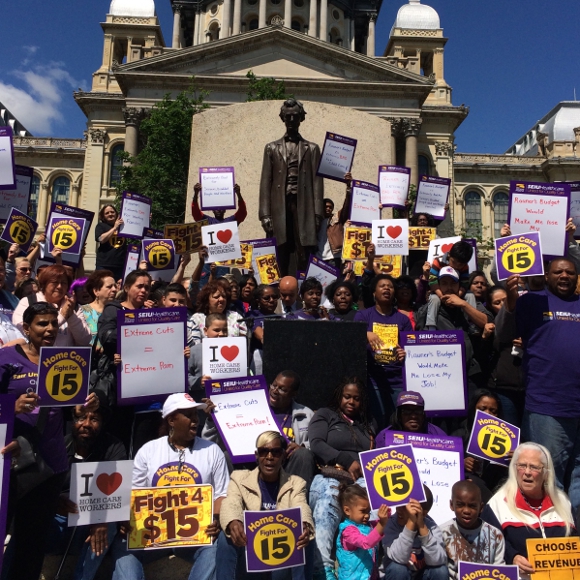 Urge Fair Revenue as Means to Meet Vital Needs of Seniors, Kids and People With Disabilities

SPRINGFIELD-Workers who provide health care and child care to thousands of families in need across the state spoke out on the Lincoln Steps today against the heavy-handed demands by Gov. Bruce Rauner to strip some 50,000 healthcare workers of bargained-for health insurance, union protections and vital training.

SEIU Healthcare had presented the Rauner administration with proposals to expand home care and child care for all Illinoisans who need it and to raise the wages of workers to $15-per-hour, funding these improvements by holding banks, corporations and the ultra-wealthy accountable through measures such as closing corporate loopholes, ending unfair bank deals and instituting the Fair Tax with higher income tax rates for the rich, and lower tax rates for working families.

According to the state’s own numbers from 2013, child care providers averaged $4.59 per hour.

Workers said Rauner’s approach to bargaining threatens to further destabilize a dependable and valued workforce who takes care of the most vulnerable in our society. Without such a workforce, the health and safety of our grandparents who need in-home care, people with disabilities and children are at risk.

“We know that our work is valuable and we’re hopeful that Bruce Rauner understands that,” said Cynthia Brown, a veteran child care worker represented by SEIU Healthcare Illinois. “Rauner made the choice to not only put us and our families at risk, by taking away our much-needed benefits and our right to speak out on the job–he is also choosing to put seniors, people with disabilities, and working families with young children at risk.”

“Governor Rauner claims what he’s doing is to ‘turnaround’ the state’s economy, but he can’t balance the budget on the backs of low-paid workers,” said Brenda McMillion, another child care worker. “We hope he joins with us to stand up for the seniors, children and disabled people that we serve and fully meet their needs by seeking new sources of revenue.”

Said Lanette Newman, an SEIU home care worker: “We’ve fought together for years to get health coverage, to get the training we need, and to secure our right to have a voice on the job. Now Bruce Rauner wants to take that away from us.”