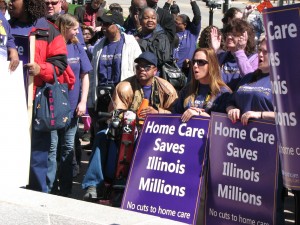 Today the United States Supreme Court announced that it will hear arguments in the case of Harris v. Quinn. The suit seeks to prevent SEIU Healthcare Illinois and Indiana, a union representing approximately 27,000 workers in the home care program administered by Illinois Department of Rehabilitation Services (DORS), from charging “fair share” fees to non-members who benefit from the wage increases and other benefits that the union negotiates on their behalf.

CHICAGO – We’re confident that the Supreme Court will honor its own precedent and reaffirm that unions are entitled to collect reduced fees from non-members to cover the costs of negotiating wage increases and other benefits on their behalf.

There is a long legacy of previous Supreme Court decisions finding that “fair share fees” – reduced fees that unions charge to non-members to represent them in collective bargaining – are fully constitutional.

If the Supreme Court rules any differently in the Harris case, it will abandon a position it has established and reinforced repeatedly. That is why we’re anticipating that the Supreme Court will uphold the rulings of both the federal and district courts in the Harris case, each of which rejected the effort to invalidate fair share fees paid by non-union home care personal assistants in Illinois.

Just as there is no doubt that fair share fees are constitutional, it is equally as clear that they yield big benefits for the people who pay them. Since personal assistants employed by the Illinois Department of Rehabilitation Services began collective bargaining with the state in 2003, they have won a 65 percent increase in wages, their first-ever health care fund and resources that support professional training and development. Those gains have been shared equally by those who pay full union dues and those who pay fair share fees – and they have dramatically improved the economic status of a group of workers who had been languishing in poverty for decades before winning their first contract.

Even today, these workers continue their struggle to obtain a living wage. The plaintiffs who brought the Harris case would have prolonged that hardship by weakening the mechanism that has raised wages for all home care workers, while also reducing turnover. Those two important advances, along with professional training the union provides, have improved the quality of home care and helped curtail the state’s spending on more costly long-term institutional care. And in the end, people with disabilities – the consumers who rely on home care providers to live independently — have been the ultimate beneficiaries of the more economically stable and better trained workforce created by collective bargaining.

Similarly, people with disabilities will ultimately be penalized if the Supreme Court voids the lower court rulings in the Harris case and impairs efforts to improve working conditions for these vital health care providers.

For all of these reasons, a decision to deviate from precedent and outlaw the application of fair share fees would be decidedly unfair to home care workers and their vulnerable consumers.

So far two federal courts have firmly rejected efforts to void fair share fees and all the benefits it has generated for Illinois home care workers and their consumers. We’re confident the Supreme Court will make the same decision.