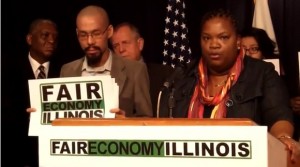 Our very own April Verrett, Executive Vice-President of SEIU HCII, spoke at a press conference and testified before the Illinois House Revenue and Finance Committee about why Illinois’ publicly traded corporations should be required to report what they pay in taxes and why it is time we hold them accountable.

Watch video of Verrett’s statement and read her testimony below before the committee on the “Illinois Corporate Responsibility and Tax Disclosure Act” (HB 2627).  (Also see Progress Illinois’ report on the corporate tax disclosure hearing).

Chairman Bradley; Vice-Chairman Zaleski, and members of the House Revenue and Finance Committee:

My name is April Verrett, and I serve as the Executive Vice-President of SEIU Healthcare Illinois-Indiana-Missouri-Kansas.

On behalf of our 92,000 members, and working families all across Illinois, thank you for providing me the opportunity to speak about the importance of corporate tax accountability and transparency, HB 3627.

Let’s be crystal clear: When large, publicly traded corporations avoid paying their fair share in taxes, it is not a “victimless offense.”

There are indeed real world consequences to corporate tax avoidance and as a result working families suffer.

Because when corporations avoid paying their fair share in taxes it means two things happen:

1) Middle class and lower income families have to pick up the tab and pay more of their meager wages to make up for the state’s lost revenue.

2) Corporate tax avoidance results in deep cuts to vital services and programs that support our most vulnerable citizens such as our seniors, adults with disabilities, nursing home patients, and single mothers and working parents living in poverty.

When a corporation shirks its responsibilities in our state, families and our communities are all negatively affected. 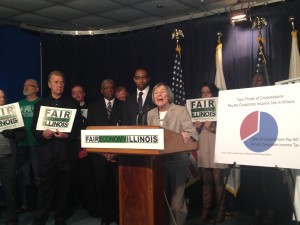 This legislation before you today, to require publicly traded corporations in Illinois to report what their tax liabilities are, along with other important tax information, and to make it available to the public at large through a searchable database, represents a major step forward to fix our state’s broken tax system.

The “Illinois Corporate Responsibility and Tax Disclosure Act” very simply uses the tools of sunlight and transparency to make sure that publicly traded corporations aren’t dodging their responsibilities.

This bill will force major corporations to come clean about what they are paying in taxes – and what they’re not.

And it will implicitly acknowledge those corporations who do play by the rules.

There is no question that members of the Revenue and Finance Committee could use this vital tax and economic information to make informed decisions before offering tax loopholes and breaks to corporations.

Indeed, we anticipate that simply requiring publicly traded corporations to disclose what they pay in taxes will strip away the seemingly endless attempts to force state lawmakers into offering tax breaks to keep corporations from leaving this state – a tactic that we consider economic blackmail.

This bill, HB 3627, is a major step towards corporate accountability.

It will finally level the playing field between large corporations and our small businesses, which are the real drivers of economic growth and create most of the jobs in our state.

So who can possibly be against greater transparency and accountability? 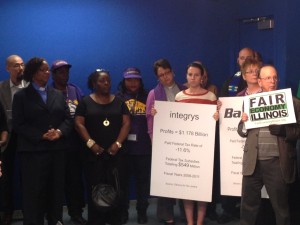 SEIU HCII members joined the press conf, and attended the hearing to require corporations to be transparent on what they pay in taxes.

Think about this for a second.

There are large, profitable corporations who are afraid of telling the public what their actual tax payments are in Illinois?

So we must ask, “What are they afraid of?”

They are clearly afraid that Illinoisans’ might actually find out the truth about how corporations manipulate the tax code, and how our communities suffer because of it.

We need fundamental tax reform in this state to focus on how to support our small businesses, rebuild the middle class, and protect vital services that empower working families.

But the first step to bring fairness, opportunity and prosperity to all Illinoisans is accurate, current and unvarnished information about how much money corporations are actually paying in their taxes — information that every resident in Illinois should have access to.

Together, these ideas push us towards creating real reform and solutions.

That’s why it is absolutely essential that this committee, on a bipartisan basis, pass the “Illinois Corporate Responsibility and Tax Disclosure Act”, HB 3627, and see to it that corporate transparency and accountability becomes law in the state of Illinois.