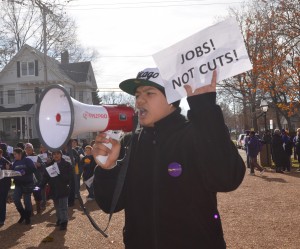 The ominous fiscal cliff refers to the deadline on December 31st, 2012, when Bush tax cuts are set to expire and mark the beginning of automatic, across-the-board cuts that will have a devastating impact on several domestic programs. In the coming weeks, federal lawmakers face a series of critical decisions that will either help put people back to work or make our economic crisis even worse.

Before kicking off a lobby day at the Capital on November 27th, home care workers, consumers and other allies met outside Senator Dick Durbin’s Springfield office to make sure he knows that Illinois residents want him to support jobs and not cuts during the deal that must be brokered in order to avoid this crisis.

Hundreds carried signs demanding ‘jobs, not cuts’ as they marched while a delegation delivered a letter urging the Senator to stand with working people.

On the public service side, 3,948 Illinois kids would lose access to Head Start, 3,348 fewer children will receive Child Care and Development Block Grant (CCDBG) services, and 2,008 fewer Illinois veterans will be served due to cuts to Veterans Employment and Training.

Other proposals to replace the sequester would mean deep cuts to other core programs like Medicaid and Medicare, again costing jobs and critical services that seniors, people with disabilities, and kids rely on.

“These cuts would be devastating to all concerned – seniors, caregivers, working parents who rely on child care, and so many more,” said Annette Jones, a Home Care Aide from Chicago. “And we’re here today to show Senator Durbin that we need his support.”

With so much at stake for Illinois, any tax and budget deal must:

WICS Channel 20 came out and covered the action, click here to see the story.

We will continue to bring our message to Senator Durbin and ask for his support – be sure to join us at our next action.