The US Department of Labor is moving forward to amend regulations under the Fair Labor Standards Act [FLSA] to include the nearly two million home care workers who had been excluded from federal overtime and minimum wage protections. This long-overdue change not only guarantees the same rights and protections for home care workers as other workers have enjoyed for decades, but continues to reinforce the fact that home care is real, important work that our nation depends on. 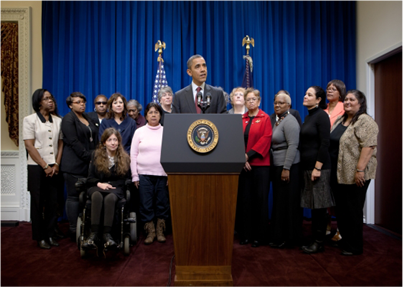 “It was so exciting to be there with the President, to be part of something so historic,” said Gilda. Gilda worked on Obama’s 2008 campaign, but hadn’t gotten to meet him face-to-face until her recent trip to the nation’s capitol.

“Before he made the announcement, he told us that even though some people don’t take this work seriously, he knows how important home care is. He told his staff that this change was past overdue and that nobody could go on vacation until they got it done and signed,” Gilda said. Before this announcement, President Obama walked a day in another home care provider’s shoes, to gain an understanding of just how important home care is to working families across America.

“Now more than ever, every job in our country must be a good job that can sustain a family, strengthen our communities and move our country forward. Very soon, every caregiver in America will be equal in the eyes of the law and equally protected,” said SEIU President Mary Kay Henry in response to this victory.

“The President went to shake my hand and I told him I wanted a kiss,” said Gilda. “That was the most exciting part!”