On December 9th, healthcare workers at Research and Menorah Medical Centers in Kansas City ratified their first ever union contract, with an overwhelming 92% voting yes. Since January 2011, members at both hospitals have been at the bargaining table, negotiating with one of the largest hospital chains in the US. 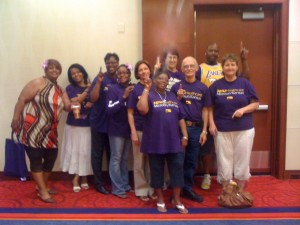 “This is a great win for our hospitals and for all of the working people in Kansas City,” said Anthony Baker, an EVS at Menorah.

Throughout the year-long contract campaign, workers at both hospitals have come together to take action, from organizing sticker days to delivering cakes to management to holding rallies.  By standing together, Research and Menorah workers won a strong contract and through the process, formed a strong union.

“It’s great to finally have a voice in the way things are done here at RMC!” said Corita Brown, a dietary worker at Research.

Research and Menorah workers won a strong contract that includes: