Before nearly 50 activists were peacefully arrested for occupying the Jackson and Clark intersection, hundreds gathered in the Plaza itself to hear testimony from elected officials and from those who would be devastated by a federal budget that slashes safety-net funding.

Home care member Flora Johnson brought her son Kenneth, who has cerebral palsy, to the action to illustrate what these programs mean for thousands of Illinois families.

“If Congress cuts these programs, my son could lose his wheelchair because if it breaks, I can’t afford to fix it. He wouldn’t be able to get his flu shots and asthma medication,” Flora said, addressing the crowd. “I’ve worked all my life and contributed to society, and like millions of others, I’m telling Congress to save Medicaid and make the wealthy pay their fair share!”

Rose Crawford, a Chicago PA, took arrest to help send the message that cutting Medicaid and other programs is bad for everyone–those who need care, those who work to provide it, and the economy as a whole.

“My client is a 59-year-old man with degenerative arthritis and COPD. He can’t stand up to make food for himself and clean his house, but he can live in his home with dignity if he has a little help. If Congress cuts these programs, he’ll be institutionalized in a nursing home that costs the state more than home care does, and I’ll be out of work and in the unemployment line. That’s why we’re out here, taking the streets and getting arrested–these programs matter.”

Visit our photostream to see more pictures of this event. 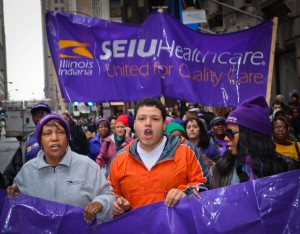 Members took to the streets shouting slogans like "You say cut back? We say fight back!"