Workers, patients, and others whose lives would be negatively affected by the closure of Englewood’s St. Bernard Hospital gathered there on November 10th to say, “Hands off my Medicare!”

As Congress’ supercommittee works toward a decision about how to handle our nation’s debt crisis, working people all over the country are sending the message that cutting the funding that keeps vital safety-net hospitals running isn’t the way to fix our broken economy. In addition to leaving low-income and elderly community members high and dry when it comes to their health, hospital closures due to Medicaid and Medicare cutbacks will put thousands of health care providers out of work–61,000 in Illinois alone. 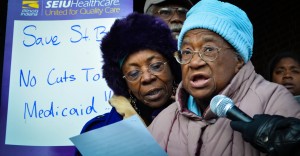 Englewood resident Frances Smith tells the crowd how the closure of St. Bernard Hospital would affect her health.

“People like Ms. Frances count on this hospital,” said St. Bernard Unit Secretary Veronica Powell, referring to a resident of a nearby retirement building who also spoke at the rally. “Cutting the funding that keeps St. Bernard open means cutting off their lifeline to the care they need.”

“And, cutting funding means cutting jobs from our economy,” Veronica added. “St. Bernard is the largest employer in Englewood–if this place closes, I’ll be out of a job, along with nearly 700 other workers.”