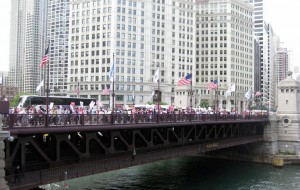 Hundreds of SEIU members joined thousands of Chicagoans on June 14th in a traffic-stopping rally to stand up against corporate greed and tell leaders from more than 80 of the Midwest’s wealthiest corporations to “Give It Back!”

The 18 unions and community organizations taking part in the Stand Up! Chicago campaign spent weeks leading up to the June 14th rally carrying out dozens of actions against the big banks who accept taxpayer bailout money but don’t provide fair loans and corporations who receive huge tax breaks but fail to create good jobs. Students, teachers, workers, the long-term unemployed, and Chicago residents from all walks of life took part in the event to demand that these banks and corporations give back our jobs, our homes, and our schools.

“While we were fighting to stop budget cuts in Springfield, these corporations were getting millions in tax breaks,” said Faith Arnold, a home child care provider from Bellwood. “People all over the country are starting to realize that if these corporations would pay their taxes, like all of us do, and create jobs like they’re supposed to, we wouldn’t be in this mess.” 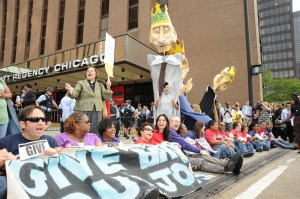 On the 14th, activists marched on the Executive Summit, a meeting of CFOs from 80 of the wealthiest companies in the Midwest, held at the Hyatt Regency and hosted by the Chicago Chamber of Commerce. Combined, the most profitable companies from the Chamber and the Summit reaped nearly $200 billion in combined profits last year and millions in corporate welfare tax breaks at a time when Chicago families are struggling with the third highest poverty rate and second highest foreclosure rate in the U.S. and an unemployment rate stuck at 9%.

“As a child care provider I’ve been personally affected by the lack of jobs in this country. The father of the kids I care for got laid off after 20 years, and their family is going to have to move out of state. My son’s

18, just graduated from high school, and he can’t find work anywhere. So I came out with him along with some of the school-age kids I take care of, to give them an opportunity to get involved in a problem that affects them every day.”
-Faith Arnold, Child Care Provider, Bellwood

Home care aide Sandra Wiekerson was one of 24 activists who risked arrest on June 14th, blocking the streets near the Hyatt to send a clear message that corporate greed is hurting our neighborhoods, our schools and our economy. 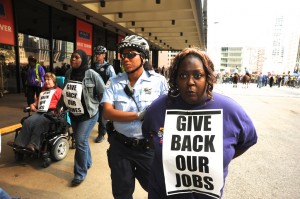 “We needed to send a message to the big corporations and big banks. Taxpayers bailed them out while working people like me can’t even get loans to stay in our homes. Why did we bail them out if they’re going to behave like that, just greedy and thoughtless? We have to stand up or nothing will change.”

“This is definitely the beginning of a movement,” Sandra said. “I had the pleasure of being in Los Angeles last month for the Member Leadership and Action Conference, where 1500 SEIU leaders from all over the state acted against some of the same multinational corporations we went after in Chicago—Chase, Bank of America, McDonalds, and others.  There are actions like this popping up all over–all kinds of people are standing up together and saying, ‘Enough.’”

“I saw people just on the street see us march past, grab a sign, and join us,” said Cecil Cobb, who works in materials management at Northwestern Memorial Hospital. “It was impossible not to feel the energy in the crowd. This isn’t the last that these greedy bankers and CFOs are going to see of people like us.”

To learn more about what you can do to fight back against corporate welfare, check out the Stand Up! Chicago website and Facebook page and sign up for updates.