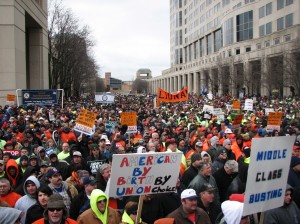 Members of SEIU Healthcare Illinois & Indiana have kept a constant presence in the State House in Indianapolis on a regular basis fighting back budget cuts to home care and attempts to strip private- and public-sector workers of many union rights.

Bus loads of SEIU Healthcare members joined a crowd of thousands outside the capitol building on March 9 to protest attacks on the middle class by mostly Republican legislators’ anti-worker legislation. It was the largest rally ever in the capital city.

Protesters were joined by Indiana Democratic legislators who left the state to prevent a vote on anti-worker legislation. So-called “right to work” legislation weakens workers by driving down wages and benefits and stripping power from working people’s unions.

“If we lose this fight, everybody will be hurting. It will drive down wages and protection for workers throughout the state,” said Tammy Bear, a home care worker for Help At Home Indianapolis.

“If we let them take our right to organize as workers, what’s next?” asked Phyllis Campbell, a home care worker from Joliet, Ill. “I came here to take a stand with my brothers and sisters because I know that if we don’t stop it here, workers in Illinois will be next.” 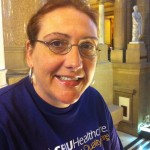 Indiana members are fighting to stop cuts to the CHOICE and Disability Waiver programs that allow seniors and people with disabilities to get quality home care.

“Our consumers don’t want nor do they need to stay in a nursing home,” said Addus home care aide Janet Starks from Seymour, Ind.

“In their homes they get the care they need from professional providers and they are near family. Nursing home care, while necessary for some, will not save taxpayers money for those who can stay in their homes,” she said.