On February 14th, SB 1, the $15 minimum wage bill was signed into law in Illinois.

“Our 50,000 home healthcare workers allow seniors to live independently and allow people with disabilities to live in their homes. These services save millions of tax dollars and improve the quality of life for the person receiving the care. Yet, far too many of these workers barely make $12 an hour.

Not a day goes by that we don’t hear stories about a child care or even a hospital worker who has to make difficult choices about whether to buy medicine or buy milk and cereal so their children can have breakfast.

That’s a shame. Caregivers should be able to do both – buy medication, pay rent and buy groceries.” 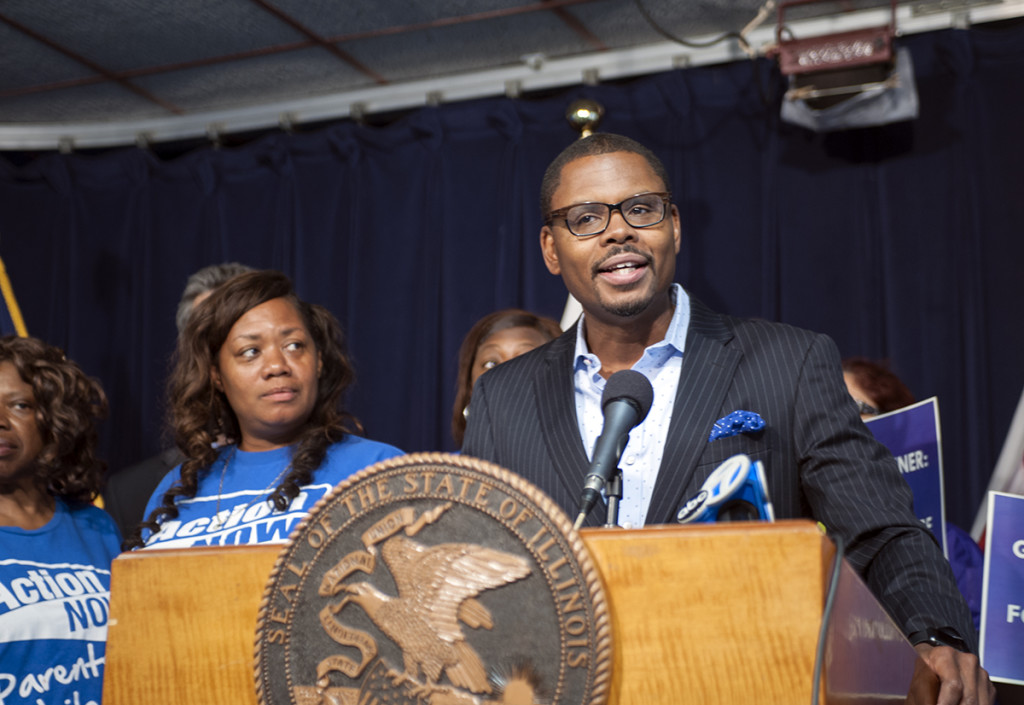 First in the Midwest

With the passage of SB1, IL became the first state in the Midwest to pass a $15 minimum wage. 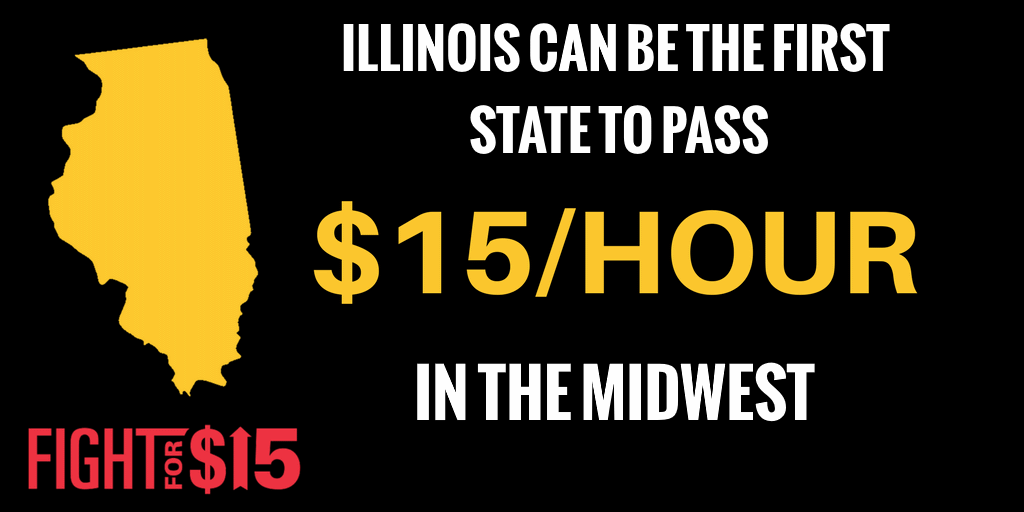 Workers All Across the State Need $15

Download a fact sheet from the Illinois EEPI on the $15 minimum wage.

Every region in Illinois needs a $15 minimum. See pages 6-7 of this report for more details.

“There is no corner of this state where $8.25 is an acceptable wage. That is a poverty wage no matter where you are in Illinois. It’s a wage designed to keep workers trapped in cyclical poverty…If we want people not to be poor we need to pay them more…This bill will provide a raise for 1.4 million people.”

Workers with children need even more than $15 an hour – even in the state’s lowest cost regions. For example, in Rock Island – the lowest cost part of Illinois – for a two-worker family with two kids, by 2022 each parent will need to earn at least $18.97 an hour to afford a cheap apartment and cover simple living costs.

–Even in low-cost regions of the state, like Danville, East St. Louis and rural Illinois, workers will soon need $15 an hour or more just to cover the basics. For example, by 2022 – the date by which the legislature is proposing to raise the Illinois minimum wage to $15 – a single worker in rural Illinois will need to earn $32,178 a year just to cover housing, food, transportation and other basic costs, according to the Economic Policy Institute’s family budget calculator. This translates to $15.47 an hour for a full-time worker. Similarly, in Danville and East St. Louis, a single worker will need to earn about $15.55 an hour by 2022 to meet basic living costs. 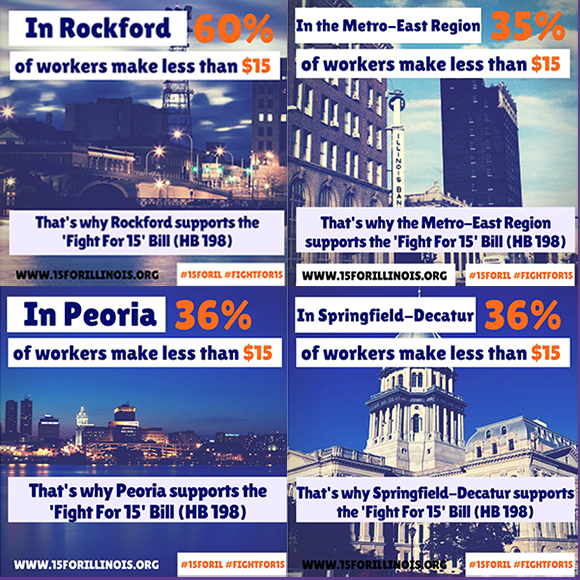 SEIU member & DORS home care personal assistant Iashea Cross works three jobs, but it’s not enough.  Her small paychecks go to her sister, who is a Chicagoan with a disability. She spoke to Chicago Tonight. Check out the video below.

“I’m constantly living with a negative bank account. How much do I make? Not enough.” 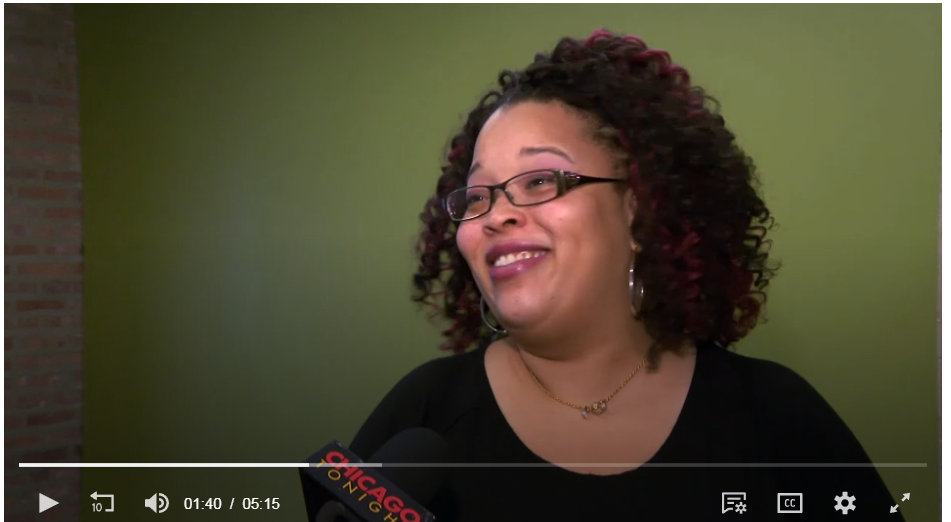 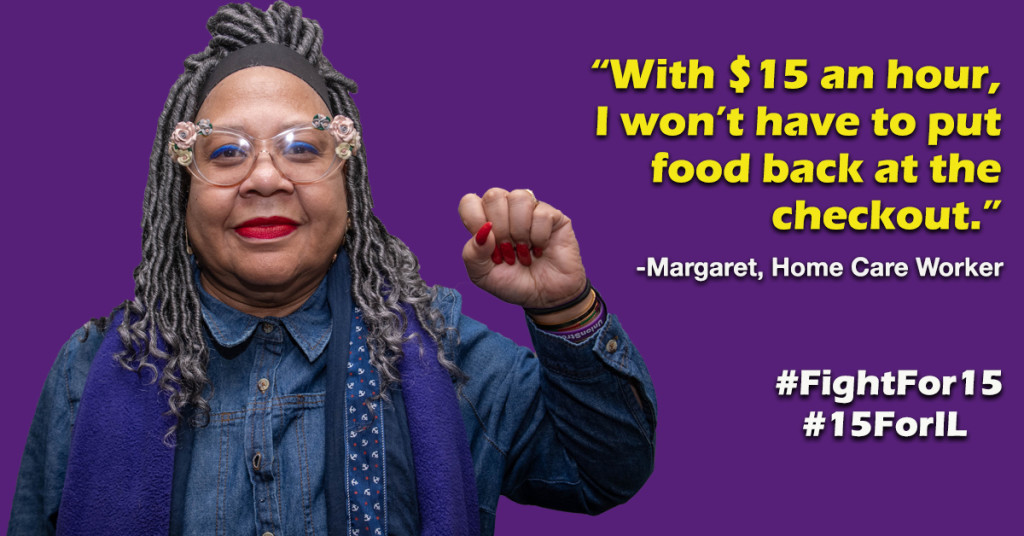 When we pass a #15forIL, Ashley of Murphysboro won’t have to say something like this  again:

“There are too many of us here who cannot make our bills each month. We are always scared about being kicked out of our house or having our car taken away.” 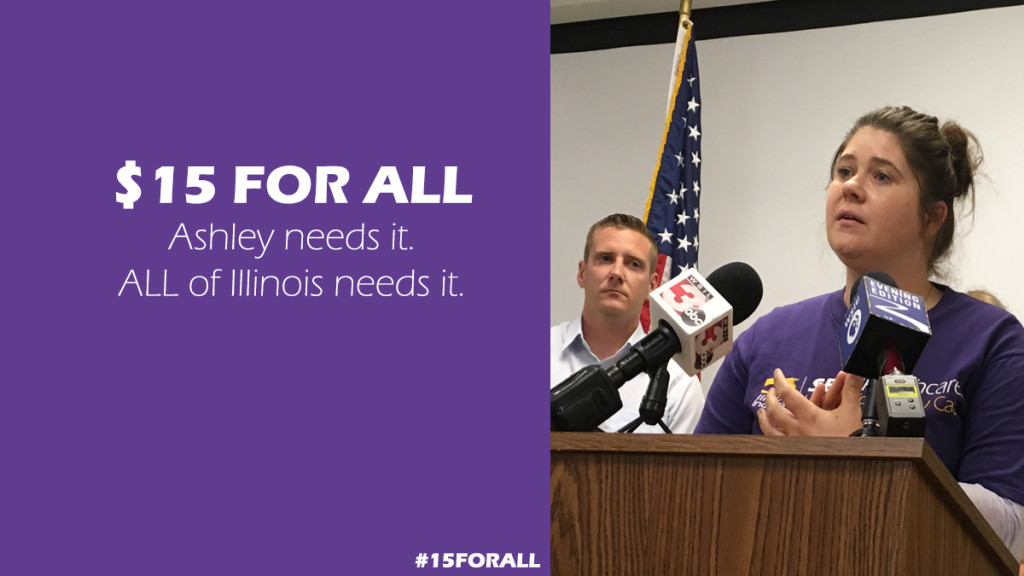 When we pass #Fightfor15, mothers like Liz of Homer won’t have to stay up for 24 hours straight, working three jobs and can spend more quality time with their families instead. 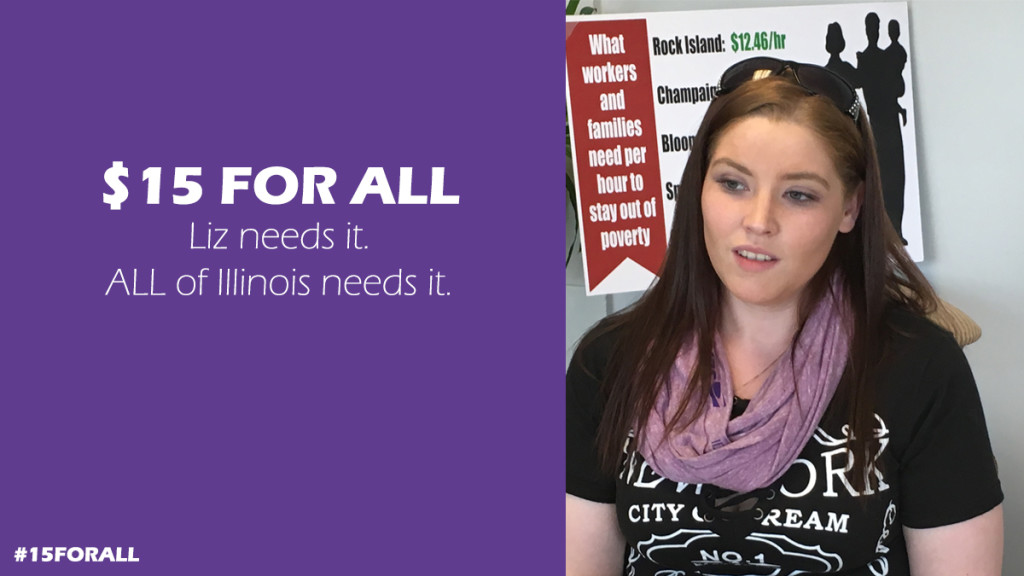 When we pass #15forAll, Gail from Springfield won’t have to choose between the grocery bill, light bill, and the gas bill.

When we pass a $15 minimum wage, caregivers like Tanya from Harvey won’t suffer months without electricity. 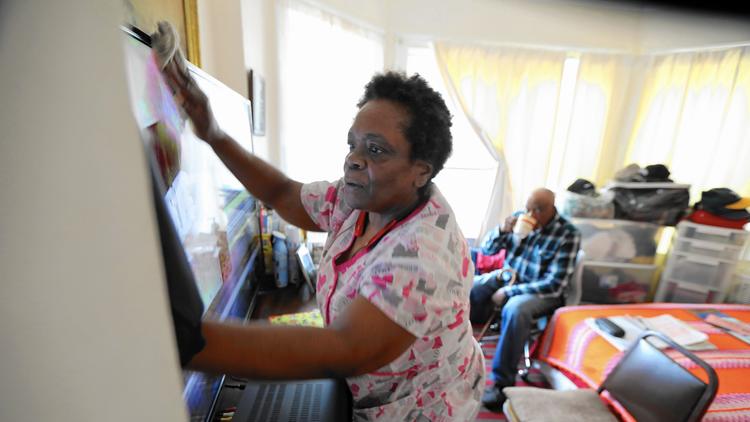 When we pass $15, hospital workers like Tichina can afford to put her daughter in a quality early learning program.

When we pass $15 in Illinois, early childhood teachers like Nicole Young will earn a living wage.

“I have a bachelor’s degree in psychology. Administrators want us to go to school but they don’t pay us enough for the credentials we have. Despite the important work that we do — caring for children while their parents work — and despite the increased cost for parents, our wages have stagnated. 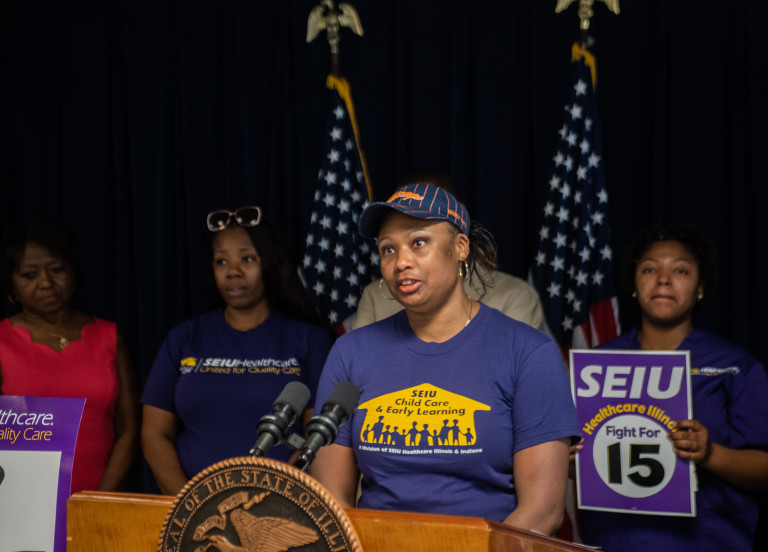 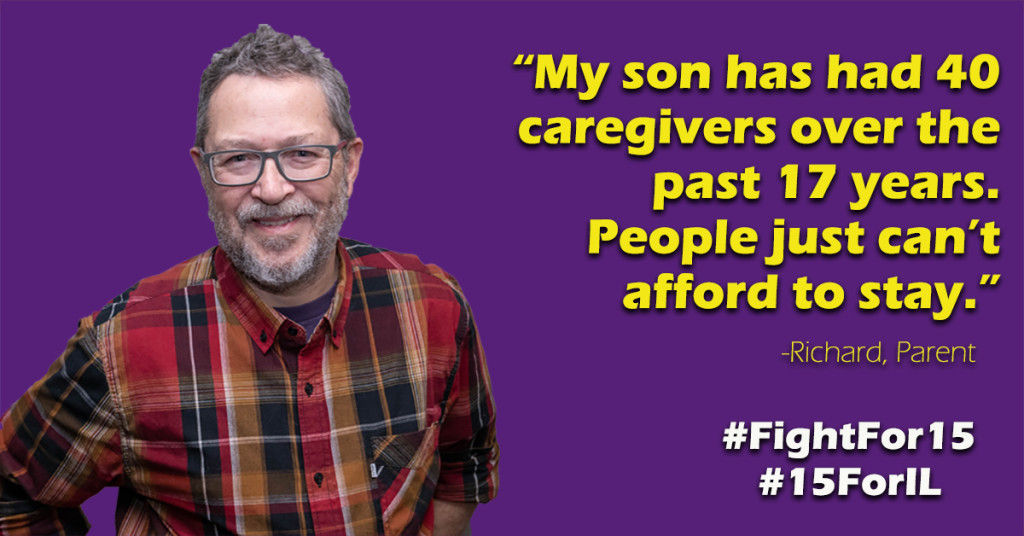 $15 is Good for Business

A study from the University of Illinois showed that when Chicago raised it’s minimum wage, job growth was the same as in places in the suburbs that didn’t raise the wage.

“As they have phased in their minimum wage increase, the unemployment rate has not increased by more than surrounding suburbs that did not raise their minimum wage,” Manzo said. “Employment growth is statistically the same for the city of Chicago as it is for the suburbs.”

A study from the University of California at Berkeley looked at minimum wage increases in six cities, including Seattle, which is raising it’s minimum wage to $15.  The study found the workers’ paychecks were boosted while not harming jobs.

“Pooling the data from the six cities, the researchers found that a 10 percent increase in the minimum wage raised weekly earnings for food service workers between 1.3 and 2.5 percent. Meanwhile, employment levels in the industry remained relatively flat, ranging from a 0.3 percent decrease to a 1.1 percent increase.” 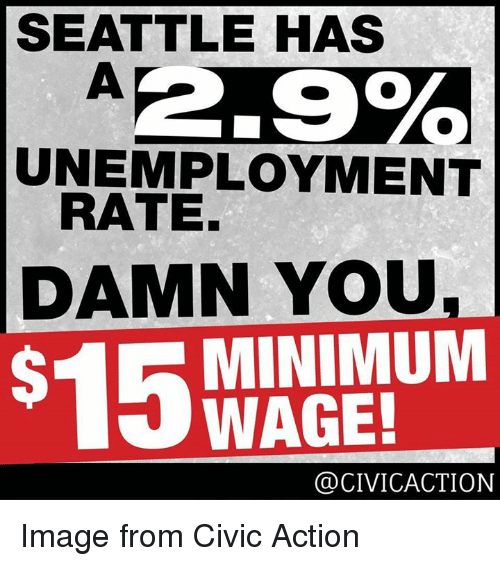 Workers aren’t the only ones speaking out for a $15 minimum wage in Illinois — so are small business owners. Kelly Vlahakis-Hanks, CEO of Addison’s Earth Friendly Products, pays her workers at least $17 an hour. Since raising the pay rate, turnover in the 300-worker firm has been cut in half. 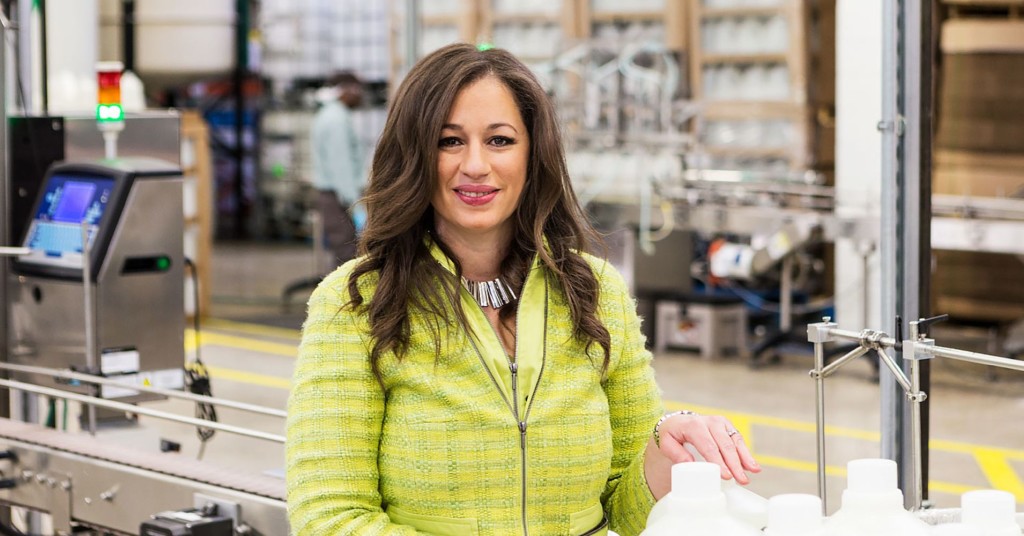 Dan Sherry, owner of Kennedy’s Creative Awards of Waukegan, said his small, 77-year-old family firm is a lot smaller than Earth Friendly Products, but has had the same experience. When he began working for the company after a stint with a bigger company,

“I was trying to get away with the lowest cost,” Sherry said. “When you’re not paying a living wage, even if they love their job, your employees are almost forced to leave.”

David Borris, owner of Hel’s Kitchen Catering in Northbrook, supports a $15 minimum wage in part because it increases demand in the economy.

Why Should the Public Subsidize Big Businesses That Pay Low Wages? 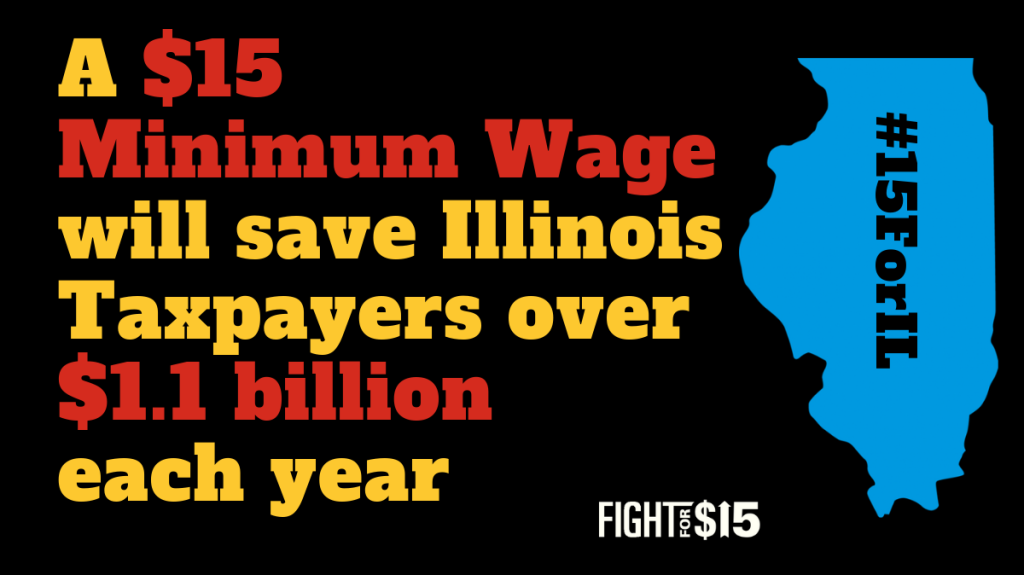 No worker should be left out. Tipped workers deserve a living wage too. Here’s an excerpt from a story from the Southern Illinoisan, which describes what tipped workers go through:

Shirley Holden, a Chicagoan who works in the service industry, testified to the “instability” and “constant stress and anxiety” she has felt in her 20 years as a worker whose pay is based on tips.

Holden said despite the tip minimum wage, wage theft is a problem in the service industry.

There’s a perception among too many customers that servers have to “earn” a tip by flirting. Allowing lower wages for tipped workers encourages sexual harassment says Shirley Holden, a tipped worker @rocunited #15forALL #MeToo pic.twitter.com/bOg4sqlMhq

Push made for minimum wage hike in Illinois

Illinois Democrats want a $15 minimum wage. These are the options on the table.

Greg Kelley: The caregivers are the ones owed a higher wage

“It’s Fearful” As House Bill 198 Goes Before Full House, Stories of Struggle from All Corners of Illinois from Low-Wage Workers