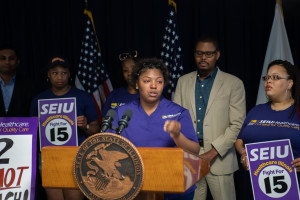 Gov. Rauner’s Veto of the $15 Minimum Wage Bill Took Away Living Wages from Low-Income Caregivers Who Urgently Need a Raise to Survive and Support Their Families

But for Tichina Haywood, a CNA at Swedish Covenant Hospital and mother of a 3-year-old, she won’t benefit as she currently earns $12.67 an hour. When Chicago’s minimum wage goes up again to $13 in July 2019, the increase will be only a marginal increase. 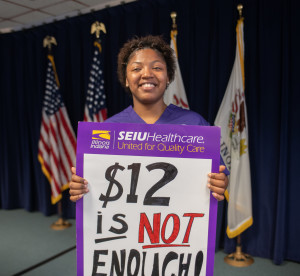 had to hold back tears during her speech. “I have to choose whether to pay my rent on time or buy groceries from my daughter. I want to put her in an early learning program where she can grow and learn more – but I don’t have the money for that. Even though I’m a hospital worker, dedicated to my job and serving my patients, I can’t even afford my hospital’s health insurance.”

A few townships and municipalities in Cook County such as Evanston and Oak Park adopted the County’s $11 minimum wage ordinance starting July 1st of this year. And Chicago’s minimum wage will rise again to $13 an hour on July 1st, 2019. But for the rest of Illinois the minimum wage is an appalling $8.25 an hour.

Workers celebrated the modest wage increase in Chicago and acknowledged the sheer amount of grassroots organizing and effort it took. But the goal has always been to raise the wage to $15 an hour.

That’s why Governor Bruce Rauner’s veto of the $15 minimum wage was so devastating to working families across the state. Rauner’s decision took money away from low-wage caregivers that urgently needed a raise – workers who serve in vital jobs and industries in hospitals, nursing homes, home care and child care. These sectors have large staff turnovers because they pay poverty level wages which undermines the stability and effectiveness of those programs, agencies, and organizations. 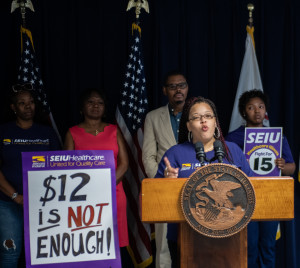 (Iashea Cross, a personal assistant and home care worker in the DHS Home Services Program says voters must take our fight for $15 to the ballot box).

Iashea Cross, a personal assistant and home care worker in the DHS Home Services Program. cares for her younger sister, Bonita, who came down with a rare condition in 2011 that impacts her joints and muscles.

“Gov. Rauner had the opportunity to sign legislation that would have raised the minimum wage to $15 an hour in a series of steps across Illinois. But Bruce Rauner shamelessly vetoed that bill that literally took money out of the pockets of low-income workers because of his extreme ideology. 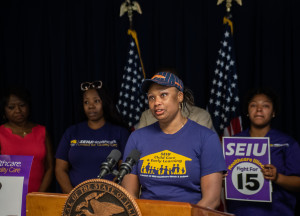 (Nicole Young, a child care center on the far north side who earns $14 an hour, criticized Mayor Emanuel who undercut the campaign to pass a $15 minimum wage bill).

Nicole Young, a child care center on the far north side who earns $14 an hour, criticized Mayor Emanuel who undercut the campaign to pass a $15 minimum wage bill.

“I have a bachelor’s degree in psychology. Administrators want us to go to school but they don’t pay us enough for the credentials we have. Despite the important work that we do — caring for children while their parents work — and despite the increased cost for parents, our wages have stagnated.

“Rahm Emanuel can and should address this crisis, and the answer is not to ask parents to pay more. In order to fix it, we need additional public funding to expand access to child care and ensure quality – and that means paying providers living wages,” said Young.

Poverty level wages trap workers over many years. For example, Yolanda Morris has been working as a certified nursing assistant in nursing homes for over 20 years.

“I made minimum wage when I first started working in a nursing home in 1997. 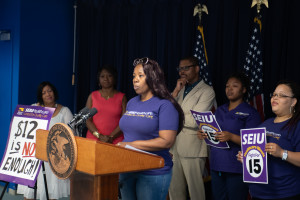 (Yolanda Morris, a nursing home worker for over two decades, still makes under $15 an hour despite the fact that she’s a dedicated caregiver; June 29, 2018).

After two decades, I still make under $15 an hour—and I still struggle to pay my rent and all my other bills and to do what’s right for my two children.”

Aldermen Ameya Pawar (47th Ward) and Toni Foulkes (16th Ward) both spoke at the press conference and said that although the City Council did raise the wage, which provided more money in people’s pocket, there is still more work to be done to pass a $15 starting wage. 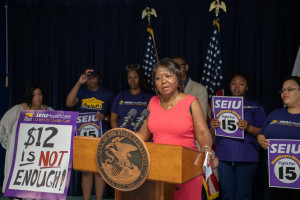 “I hope that all working people under what Gov. Rauner’s actions mean for families across Illinois and understand what the stakes really are. We have the power to win a $15 minimum wage. But part of our fight has to be at the ballot box! Voters across Illinois must hold Gov. Rauner responsible for taking away the raises that low-wage workers urgently needed,” said Flowers.