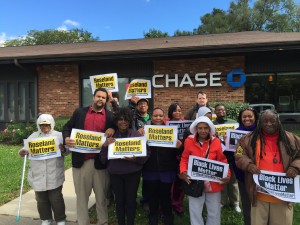 Members of the Roseland community protest Chase Bank on Thurs, Oct. 1st, 2015; to demand that the rich and large corporations pay their fair share in taxes to protect vital services and to invest in low-income neighborhoods.

(October 1st, 2015, Chicago) — Working families, along with faith and community leaders from the Roseland area held a protest outside a Chase Bank branch on the south side of Chicago and delivered a letter to the bank’s management to demand that the rich pay their share in taxes to protect vital services for working families.

After three months of Gov. Rauner’s ongoing state government shutdown, advocates urgently called on state lawmakers and the Governor to pass a state budget and to “choose revenue solutions” to invest in low-income communities like Roseland instead of slashing vital programs such as child care, home care, and Medicaid assistance.

Working families in the Roseland community continue to suffer from a complete lack of good jobs that pay living wages, quality public schools, affordable housing, and access to affordable child care and healthcare.

Faith and community leaders say that economic violence is fueling real violence in our communities that is destroying lives. 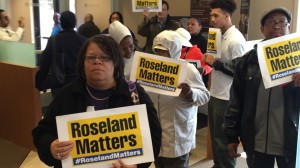 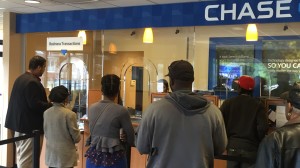