Members and allies chanting in front of the South Side YMCA

Management at the South Side YMCA was taken by surprise last Saturday when a spirited crowd of early educators, parents, and community supporters rallied and marched for fair wages and affordable healthcare at the YMCA of Metro Chicago!

“As teachers, we’re entrusted with the care and education of the children in this community, so what we do in a day matters,” said teacher Kim Cotton, addressing WGN reporter Sean Lewis. The report played on the evening news, cranking up the heat on management and tying the workers’ contract fight to the ongoing Fight for Fifteen movement that strives to win fair wages for ALL workers. 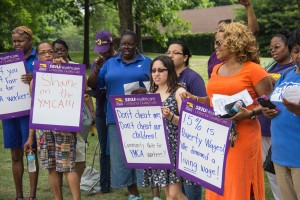 Our rally signs expressed our demands to the community.

The YMCA refused to face the cameras, but a spokeswoman stated that the Y would “work to secure a contract that protects [the workers’] interests and the overall interests of the YMCA of Metropolitan Chicago.”

We’ll see whose interests the Y really cares about when these fired-up educators go back to the bargaining table on July 9th. They’ll face management with a significant new victory under their belts. When workers stick together, workers win!

See our coverage from WGN and additional video testimony below.