(Dec. 5th, 2013) One year after the first strike hit the $200 billion fast-food industry, fast-food workers walked off their jobs Thursday.   Workers went on strike in every region of the country and were joined by SEIU members and working families rallying in 100 cities as the fight for $15 an hour and the right to form a union without retaliation continues to grow.

SEIU Healthcare Illinois Indiana Missouri and Kansas members rallied in support of striking fast-food workers across the Midwest including Indianapolis, St. Louis, Kansas City, Chicago, and Peoria to name but a few. 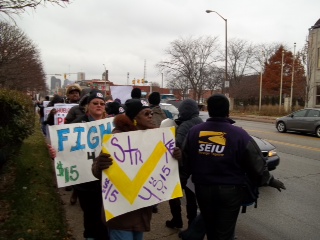 Indiana members joined workers at two McDonald’s locations and a Burger King. There are nearly 33,000 fast-food workers in the Indianapolis area, making a median wage of $8.67 an hour. An adult with one child needs to make $17.81 an hour working full time in the Indianapolis area just to afford the basics, according to a model developed by a professor at MIT.

“I’m very proud to be a part of this. We’re finally getting our voices heard,” said Shawntel Chinn, a striking McDonald’s worker. “We make billions in profits for McDonald’s and other big corporations and they don’t care about our needs. I work hard but I have to choose between paying rent and buying winter boots for my daughter.” 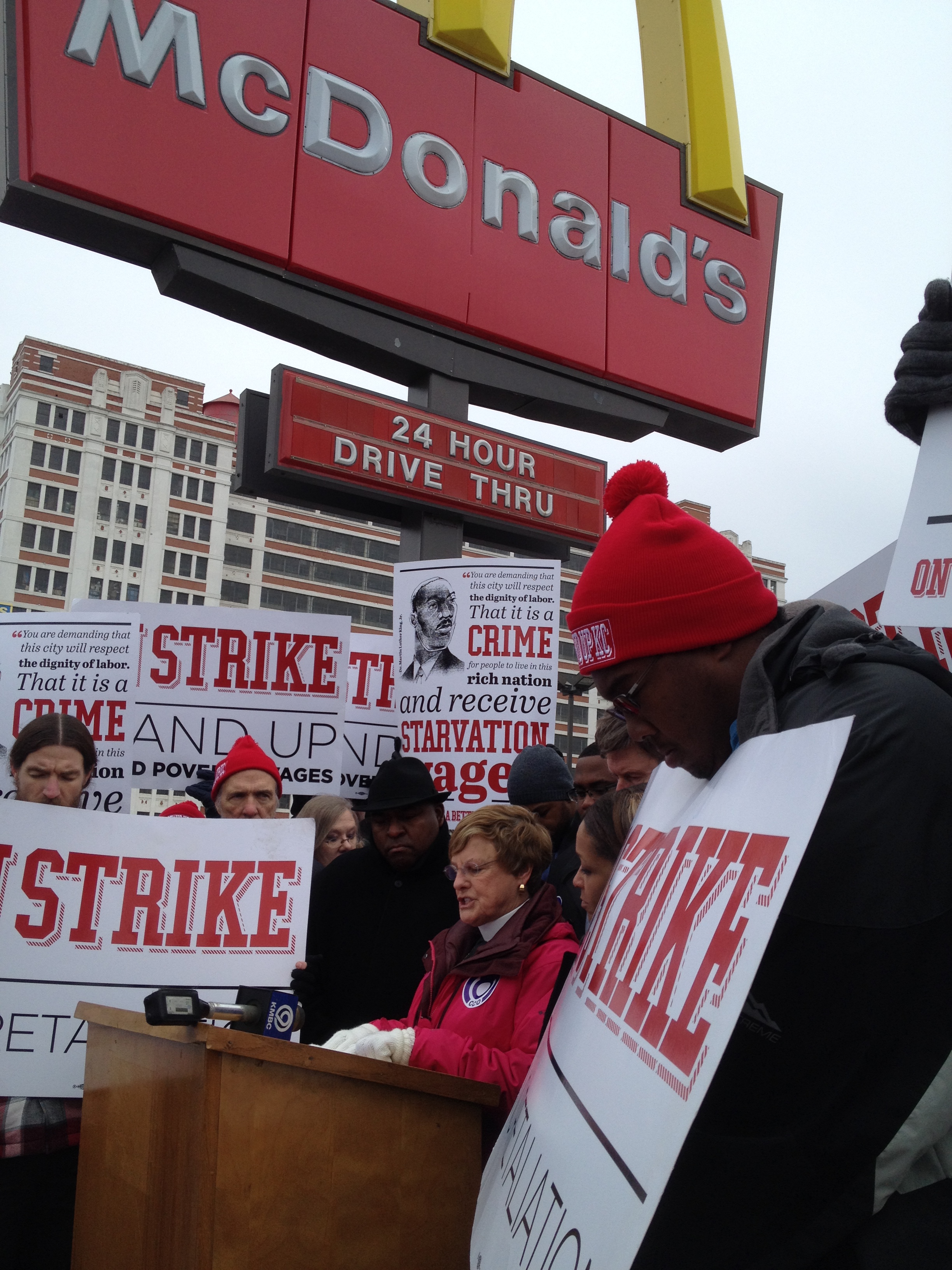 Kansas City press conference outside of McDonald’s on December 5, 2013

In Missouri, fast food workers in St. Louis and Kansas City also joined the strike lines that swept the nation. In KC, the day kicked off at 6:30 a.m. with a prayer vigil before workers and supporters departed in freezing temperatures for strike lines at McDonald’s, Burger King, Wendy’s, and Subway.

Faith leaders from across the metro area joined workers in their call for $15/hour and a union, calling out the billion-dollar fast food industry for what they described as unfair and unethical economic practices.

“An economic system that values profit more than the welfare of people is unjust and unethical,” said the Rev. Susan McCann, a minister at Grace Episcopal Church at press conference outside a Kansas City McDonald’s. “No one who works full time should be living in poverty.”

In both St. Louis and Kansas City, SEIU members were out in full force standing in support of fast food workers’ quest for living wages and a voice on the job.

Coverage of the strikes were all over the media, checkout a few stories from the Kansas City Star here, KCTV 5 here, and WDAF 4 here.

Workers held protests at the Burger King and McDonald’s on University Street in the morning.  Then before noon, workers rallied outside two McDonald locations on Main Street and Knoxville Avenue, then protested a Wendy’s on Big Hollow Road. The actions generated enormous press, including an interviews with workers on Peoria public radio, and local NBC and CBS stations.

“We can’t spend our time hoping that someone else will change this problem of poverty wages – we all have to step up and fight for better wages and the right to form a union,” said Darian Neal, who works a minimum wage job for Wendy’s on Big Hollow Road in Peoria for 9 to 12 hours per week. He barely has enough money to buy food and lives with his mom to make ends meet. “I don’t even eat at McDonald’s just because I can’t afford it. These rich CEOs and corporations know how hard it is for working families trying to get by. They prefer to spend millions of dollars on advertising than give their workers living wages.”

Background on Fight for $15 Strikes

Fast food is a $200 billion a year industry, yet many service workers across the country earn minimum wage or just above it and are forced to rely on public assistance programs to provide for their families and get healthcare for their children. Nationally, the median wage for cooks, cashiers and crew at fast-food restaurants is just $8.94 an hour.

A recent report by the University of California-Berkley found that more than half of front line fast food workers, including more than half of those who work more than forty hours per week, earn so little they are forced to rely on public assistance programs, costing taxpayers $7 billion per year. Following that report, news broke that McDonald’s – the worst offender relying on taxpayers to pick up the slack for its low wages – was actually directing its workers to apply for public assistance on its McResource hotline.

Low-wage jobs have accounted for the bulk of new jobs added in the recovery, and retail and fast food are among the fastest-growing sectors, slowing the recovery and hurting our local economy. A recent study from the Economic Policy Institute finds that wages were flat or declined for the bottom 60 percent of workers from 2000 to 2012, even while productivity grew by 25 percent over this same period. And while median household income has risen, according to a new study, it is still more than 6 percent below pre-recession levels. That loss in income has been most acute among low-wage workers, who have also seen a disproportionate drop in real wages in the recovery.

Companies like McDonald’s, Burger King and Wendy’s have said that their low-wage jobs are stepping stones to better ones, but that couldn’t be further from the truth. A report released last month by the National Employment Law Project reveals managerial positions make up just 2.2% of all jobs in the industry, proving that fast-food jobs are not the “launching pad” industry officials would like Americans to believe. Likewise, the industry’s claim that its workers are teenagers is simply not backed by fact. Seventy percent of fast-food workers are in their 20s or older and more than one-quarter of fast-food workers are raising at least one child.