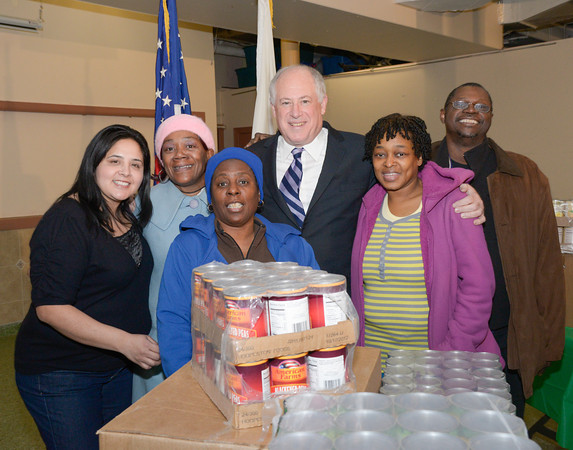 Governor Quinn spoke at a press event held at Saint Pius Church on Ashland Ave. in Chicago to make the case that Illinois must raise the minimum wage.  Standing alongside him in the photo, (from left) was nursing home worker Susana Fragoso; and Department of Rehabilitative Service (DORS) personal assistants Retona Wilson; Yvette Anderson; Theresa Williams, and James Scott.

Gov. Quinn’s speech came only two days after working families and community groups delivered petitions to the Chicago Board of Elections today to place a non-binding advisory referendum on the March ballot to establish a city minimum wage.

See the press release below from our coalition partners below.

(December 18, 2013, Chicago) – Governor Pat Quinn spoke today at Saint Pius Church in Chicago and gave a forceful and passionate plea to lift the minimum wage in Illinois on behalf of low-income workers and struggling families.  Governor Quinn spoke about the need to tackle the growing poverty and income inequality crisis by paying workers better wages.

Governor Quinn’s speech today called for urgent action in Springfield to give workers the improved wages they need to afford basic necessities.

Low-wage workers are not alone in this fight. They are joining together with working and middle class families, community leaders, and interfaith partners to say that working people simply cannot survive on poverty wages anymore. This movement is clearly expanding and the demands for change in Illinois will only continue to grow.

Today it was made clear that minimum wage workers need their leaders to take swift action to solve Illinois’ inequality crisis.

Raise Illinois is led by a coalition of community, business, faith, and labor organizations along with low-wage workers and families that are fighting to raise the minimum wage in Illinois.  Raise Illinois is a major legislative and grassroots campaign to increase Illinois’ minimum wage from the current $8.25 to $10.65 per hour. www.raiseillinois.com