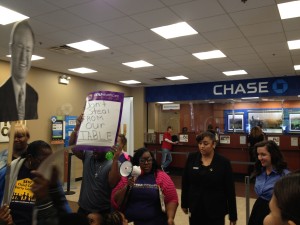 (September 13, 2013, Chicago) — SEIU members who attended a Member Boot Camp to learn leadership and activism skills planned a series of protests and rallies against rich CEOs and corporations, including Chase Bank in Hyde Park Chicago, to demand that the wealthy pay their fair share in taxes.  Workers say that it is critical that Illinois’ state lawmakers get their priorities straight and make “tax fairness” a central goal in the state legislature.

Workers say that Illinois desperately needs to create a more fair tax system that supports Illinois’ small businesses, eases the burden on working families, and allows the state to make critical investments in education, infrastructure, and health care to grow the economy and support working families.

The series of rallies and protests are intended to raise awareness among the public and elected officials that the status quo of having a flat income tax–which continues to harm working families and stifles job creation and economic growth –is no longer acceptable.  Illinois needs to build a strong middle class with successful and thriving small businesses. However, small business owners also continue to pay a higher tax rate in the state than corporate CEOs.