The October 10th march and rally of over 7000 Chicagoans, including hundreds of SEIU members, was only the beginning of a week of action to Take Back Chicago.  Throughout the week, members of SEIU, other unions and community groups participated in a series of targeted actions to take back our jobs, homes and schools.

“I know quite a few people in my community dealing with foreclosure, who can’t get by because they’ve been laid off as the economy has gone down. They’re doing everything they can to get a job and get educated, but the jobs just aren’t there. That’s why I’m here,” said Leary Ann Crawford, a home care worker in Chicago. 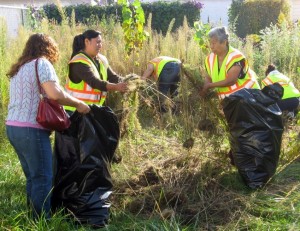 Protesters cleaned up one of Bank of America's many foreclosed and abandoned homes and delivered trash and weeds to their rightful owner--the bank. Inside, volunteers found garbage like rotten food and dirty hypodermic needles.

The theme of Tuesday’s actions was Take Back Our Homes.  Hundreds of protesters marched to Chase Bank and Bank of America to demand that the banks follow vacant property ordinances and maintain foreclosed properties that they own.  Tired of getting no response, community members took matters into their own hands and cleaned the properties themselves.  As part of the protest, neighbors delivered a cleaning bill to Chase Bank, and garbage collected from a bank-owned home to Bank of America.  Other actions throughout the day focused on ending unfair foreclosures and practices that push renters out of foreclosed properties before the end of their lease.

Wednesday’s actions focused on Taking Back Our Schools.  The day kicked off with a corporate welfare tour of downtown Chicago to draw attention to taxpayer money being given away to rich corporations that should be spent on improving schools and communities. The day ended with a press conference in a Bank of America lobby calling on the bank to renegotiate toxic financial deals that are hurting Chicago schools.

On Thursday, members of SEIU and other unions held actions to Take Back Our Jobs.  Several hundred protesters rallied outside Chicago’s Bank of America headquarters while several dozen went inside to stage a “die in,” to protest mass layoffs recently announced by the bank.  Take Back Our Jobs day finished with a press conference to announce the Chicago Community Jobs Plan.  The plan addresses Chicago’s need for good jobs and strong communities by creating 40,000 jobs that would help address community needs in areas such as schools, healthcare, child care, and neighborhood improvement.

Take Back Chicago wrapped up the week by joining an Occupy Chicago action and an action in support of President Obama’s jobs bill.

For more details, photos and videos, info about what’s coming up next, and for a complete list of organizations that worked with Take Back Chicago, visit the Take Back Chicago website and Facebook page.