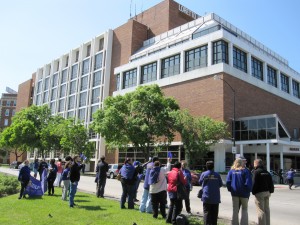 On Wednesday, July 6, SEIU members at Loretto Hospital approved their new contract by a vote of 54-6.  This overwhelming show of support was due to strong victories for both workers and patients after 6 months of bargaining.

“We fought hard to get what we won in this contract, but it was worth it.  Members are excited,” says Sarah Coleman, a Loretto dietary worker.

Highlights of the new contract include raises, increased lead pay, increased shift differentials, increased training pay, and improved pensions.  In addition, important patient care language was included that will allow the hospital, union representatives and members to work together for patient safety.