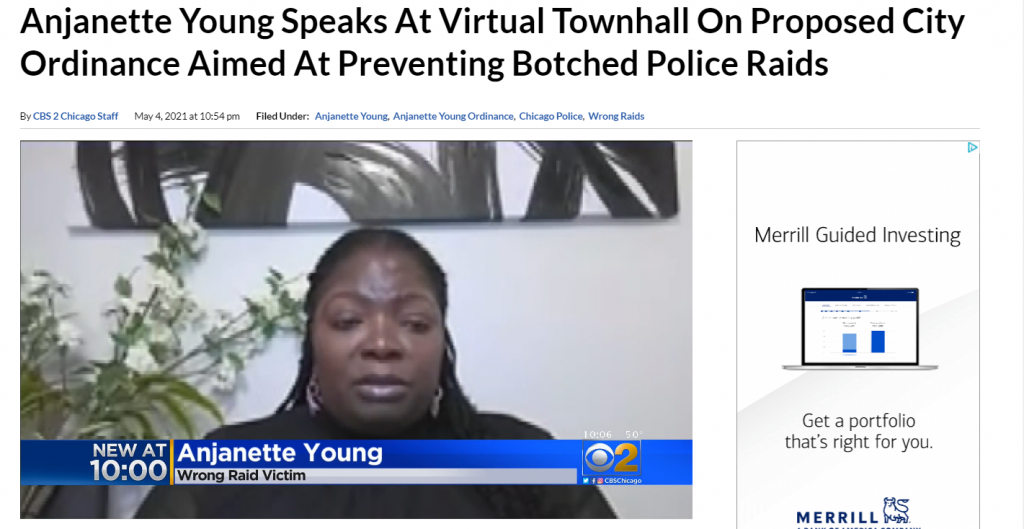 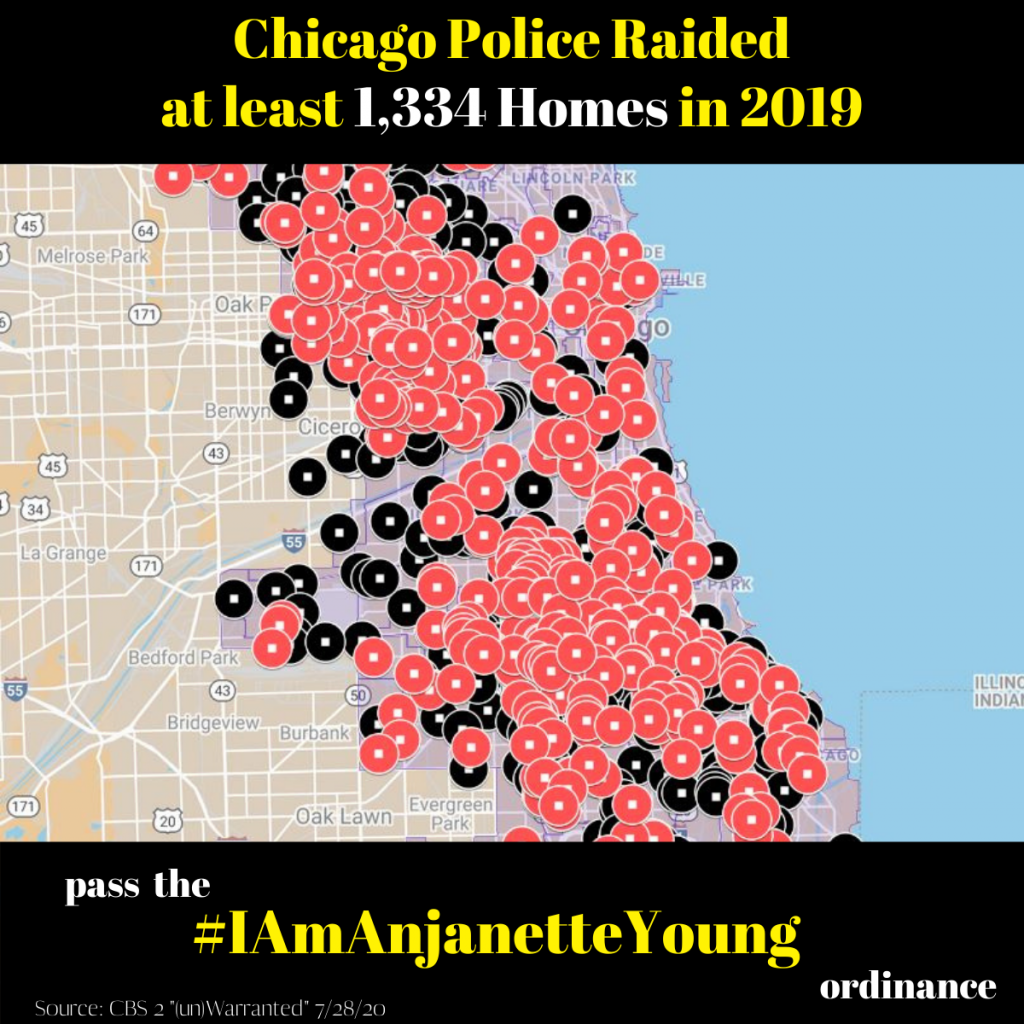 This page is on behalf of the entire Anjanette Young Ordinance coalition, which consists of dozens of groups and alderpersons. See who’s in the coalition.

Multiple dangerous & dehumanizing raids happen every single day in Chicago. There were at least 1,334 police raids in Chicago in 2019. There are many more raids in black and brown neighborhoods than in white ones. Click the map to learn more.

We have a chance to end dangerous raids by the Chicago Police Department (CPD). From 2016-2019, CPD conducted an average of more than 1,500 raids a year, 43% of which result in no arrests. We’ve all seen what happened to Anjanette Young. We know it could happen to us. That’s why we use the hashtag #IAmAnjanetteYoung and are working to pass the Anjanette Young Ordinance at City Council.

On December 14, 2020, Anjanette Young, a Chicago social worker, courageously released video of the CPD’s raid of her home—video that the City of Chicago fought to hide from the public for more than a year. Officers burst into Ms. Young’s home while she was naked, pointed their guns at her, and handcuffed her.

They held her naked in handcuffs for more than 40 minutes as they tore through her home, as they ignored her terrified pleas that they were in the wrong home. And they were in the wrong home. Like so many other CPD raids, readily available records showed that CPD’s actual target was confined inside another apartment on electronic monitoring and had no connection to Ms. Young or her home.

As CBS 2 has highlighted in its award-winning investigative series, Anjanette Young’s story is just one egregious example of a documented pattern of illegal, violent, and dehumanizing raids that have traumatized thousands of Black and Brown families, for which CPD has failed to hold a single officer to account.  These raids routinely involve breaking down doors and bursting into a family home, pointing assault rifles at everyone present including children, subjecting family members to physical and verbal abuse, destroying personal property, and then leaving families unprotected, with broken doors and locks, exposed and vulnerable to further violence.

CPD conducts approximately 1,500 raids of family homes every year. Nearly all of them have targeted Black and Brown families. Nearly half fail to yield a single arrest. And no one has been held to account.

2) Require that officers wait at least 30 seconds during knock and announce raids to give residents a chance to open the door to their home.

3) Require CPD officers executing home raids to act in a manner that is least intrusive and least harmful to the rights and safety of Chicago families.

6) Require SWAT officers to document when they point guns at people during a raid.

5) Prohibit officers from pointing their guns at a person, unless the person presents an imminent risk of death or serious bodily injury to another.

7) Prohibit midnight raids of family homes and require that home raids be conducted from 9am to 7pm, absent exigent circumstances.

8) Require officers to prepare a damage report and make immediate arrangements to address safety concerns caused by a raid, such as the breaking down of a door, which leaves a family vulnerable.

9) Require public reporting of data on all search warrants, including the causes of each negative raid, to give the community access and the means to hold CPD accountable.

10) Prohibit officers from obtaining warrants based upon information from informants who have provided false information that have led to negative raids in the past.