CHICAGO (Dec. 6, 2018)–Leaders of SEIU Healthcare Illinois, SEIU Local 73 and the Chicago Teachers Union announced today their joint endorsement of Toni Preckwinkle to be the next mayor of Chicago.

“For the last eight years, working families have cried out to have their voices heard and their needs addressed, only to get a cold shoulder from a mayor [Rahm Emanuel] whose primary accomplishment has been to make the rich richer while neglecting our neighborhoods,” said SEIU Healthcare President Greg Kelley. “Toni was a strong supporter of raising the minimum wage to $15 an hour. She’s a leader on criminal justice reform, she supports moratoriums on charter expansion and public school closures, and she has pledged to make sure that Chicago is a city where working families can afford to live and thrive.” 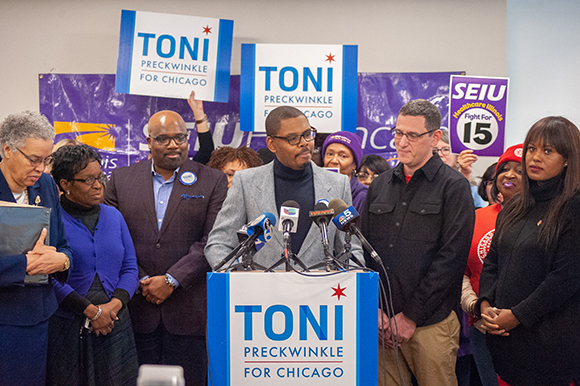 CTU President Jesse Sharkey said Preckwinkle has committed to being a champion for quality schools in all neighborhoods. “Toni represents hope for the future and this city is ready for a new vision at the top,” he said.

“Every now and then you get a person who is from the city, is of the city, who cares about the citizens of the city and they say ‘here am I, send me.’ Toni has done that. She works for Cook County as its president and she says she can do more. She’s a woman who thinks outside the box,” said SEIU Local 73 President Dian Palmer.

“When I announced for mayor I said I would work to build a broad movement across gender, race, age and geography. Today’s endorsement reflects a coalition built from our shared commitment to working families. Thank you for putting your trust in my vision for a united Chicago that works for all,” she said.