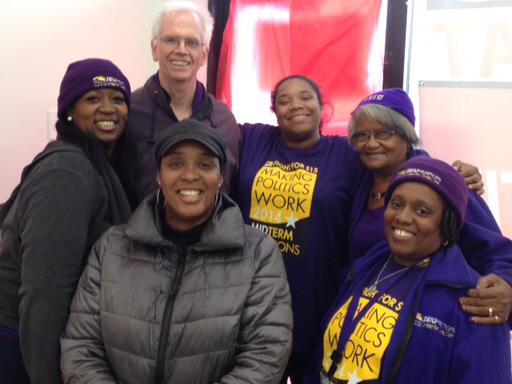 SEIU HCII applauded the amazing work of its member leaders, community partners, labor allies and staff who worked so hard to win the minimum wage increase for low-wage workers and families.  SEIU HCII said that the vote to raise the minimum wage was a clear mandate and called upon on the state legislature to immediately take up the issue during the legislative veto session.

Governor Pat Quinn, whom SEIU HCII endorsed and strongly supported, was simply outspent by his republican opponent, Bruce Rauner, who poured over $27 million of his own money into the race.  Governor Quinn, who lived on the minimum wage for an entire week to walk in the shoes of a low-wage worker, made the minimum wage issue a centerpiece of his re-election campaign and helped to galvanize public opinion.

“Low-wage workers and families in Illinois who are struggling just to survive on poverty wages won an important and historic victory tonight when voters went to the polls to demand that Illinois raise the minimum wage.

“The election results demonstrate the importance of giving working people the opportunity to support their own families and communities and to give them a positive reason to vote for their own economic future.

“We honor and recognize all of our remarkable member leaders, staff, and community partners who worked so very hard to make sure that we won the minimum wage referendum for working families in Illinois.

“Our SEIU members endorsed and supported Governor Pat Quinn because he shared our values that working families need an economy that works for everybody, not just the wealthy few. We thank Governor Quinn for championing raising the minimum wage in this election and elevating the discussion on such a critical issue facing low-income families.

“In his election speech last night, Bruce Rauner, the presumed Governor-elect, spoke about compassion and caring for the most vulnerable in our society. That has been the core of our work, and we will continue to address the needs of these most vulnerable – patients in our hospitals, residents in our nursing homes and seniors and those with disabilities who receive the home care services that our members provide, in addition to the parents and children who rely on quality and professional child care.

“We are committed, more than ever, to continue our fight to demand fundamental fairness, respect, and opportunity on behalf of all vulnerable communities and working families and will not stop until we see that vision realized.

“Although we are certainly disappointed in the election results, we are proud that our campaign set the foundation for a movement for low-wage workers and working families to take back our state from the richest 1% and its corporate special-interests.”