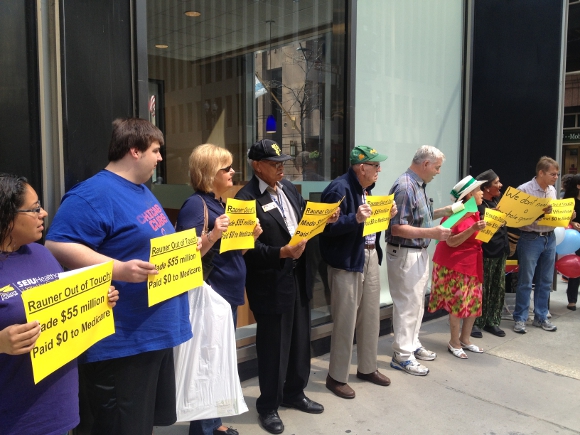 Erika Martin and community activists protest outside Bruce Rauner’s campaign headquarters on the anniversary of Medicare; Rauner uses a loophole to avoid paying his fair share of Medicare taxes – 7/31/14

(July 31, 2014) — On the anniversary of Medicare where events were held across the country, HCII member and nursing home work Erika Martin protested outside Bruce Rauner’s headquarters.  Erika spoke about the candidate’s refusal to pay Medicare taxes,  highlighted Rauner’s troubling positions around short staffing at nursing homes and wanting to lower the minimum wage.

Bruce Rauner is wrong for Illinois – he hasn’t earned our respect to become Illinois’ next governor.

Clearly Bruce Rauner cares more about his profit margins than he cares about nursing home patients and their safety.  His record shows that he’s more interested in profiting off of seniors than providing quality healthcare to all of our citizens.

Rauner opposes any idea, such as the fair tax, that would ask him or his rich corporate contributors to pay their fair share in taxes to invest in our communities.

While Rauner was principal at GTCR, the private equity firm founded a company called Trans Health, whose business was to manage nursing homes. GTCR and other investors were accused of siphoning money from the nursing homes, loading them with debt, cutting staffing levels and providing poor care for the elderly patients. In the end, several patients of the facilities under their control died due to severe neglect including malnutrition, dehydration, bed sores, infections and undiagnosed broken bones from falls. Several of the victims’ families have been awarded billions of dollar in civil suits- though it is money they will likely never see as the investors drove the company into bankruptcy and left it with few assets to pay the awards.

Juries have awarded billions to victims of Trans Health negligence that led to the deaths of their loved ones.