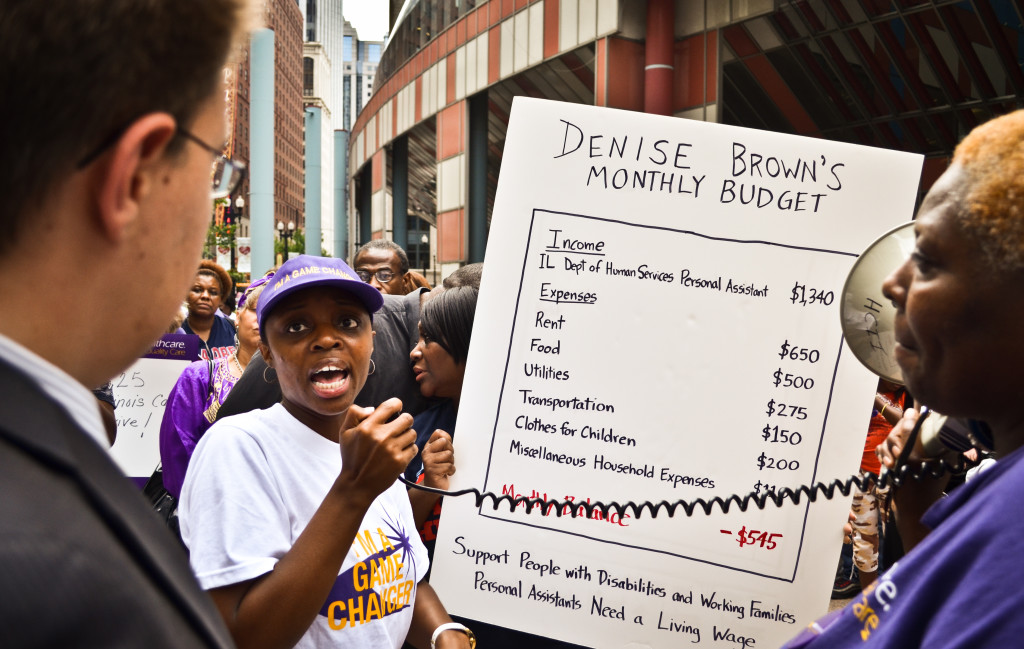 Denise Brown, home care worker, talks about how she manages to get by on poverty wages.

(Chicago, December 16, 2013) – Community groups, working families and labor allies delivered petitions to the Chicago Board of Elections today to place a non-binding advisory referendum on the March ballot to establish a city minimum wage.

Community advocates hope that the referendum will spark a serious conversation about how the city of Chicago, and all levels of government, must tackle the growing inequality and poverty crisis by lifting the wages of low-income workers.  The current minimum wage in Illinois is $8.25 an hour, so low that workers, and certainly those who support families, simply cannot survive.  Oftentimes they must work two or even three jobs just to make ends meet and make other major personal sacrifices for themselves and their children.

The grassroots movement to gather signatures to place the advisory referendum on the March ballot was spearheaded by the Raise Chicago Coalition.  Along with community volunteers, low-wage workers, and working families, the coalition includes Action Now, Brighton Park Neighborhood Council, the Grassroots Collaborative, ONE Northside, and SEIU Healthcare Illinois Indiana.

“I support raising the minimum wage in Chicago for low-wage workers because we are not invisible.  We will not stand by and let our elected officials maintain the status quo,” said Carlos Navarro, a retired Marine veteran and a ONE Northside leader living in Chicago’s 46th Ward. “I’m tired of seeing families in my community struggle to get by on poverty wages and I am confident this referendum will show the Chicago City Council that there is a need to raise the minimum wage to a fair and living wage.”

As proof of the fair wage movement’s success, and its potential, residents near the Seattle-Tacoma International Airport (SeaTac) voted to raise the minimum wage for hospitality and transportation workers from $9.19 an hour to $15 an hour.  In addition, Washington D.C. raised the minimum wage to $11.50 an hour. Next door in Maryland, Prince George County and Montgomery County both dramatically increased the minimum hourly wage to $11.50 by 2017 from the current $7.25.

Chicago’s referendum for a $15 an hour minimum wage follows the unprecedented national day of strikes on December 5th  in over 100 cities where low-wage workers protested hugely profitable corporations to demand a $15 an hour living wage.

“There is a direct link between poverty and increases in violence and crime, as well as decreases in educational achievement. When workers make a living wage, it helps build up the whole community,” said Gloria Warner, President of Action Now and a resident of Englewood.  “I am absolutely confident that working families and communities across Chicago will lift our voices and vote for this proposed referendum in huge numbers.”

As a point of reference, the Economic Policy Institute’s Family Budget Calculator, measures the income a family needs in order to attain a secure yet modest living standard by estimating community-specific costs of housing, food, child care, transportation, health care, other necessities, and taxes.  In the Chicago area, a single parent with one child would have to make $53,168 a year.  Currently, a full-time minimum wage worker only makes $17,000 a year.

And a 2012 report released by Women Employed and Action Now Institute revealed that Chicago’s low-wage workforce has grown by 30% since 2001. The majority (57.4%) of Chicago’s low-wage workers are over the age of 30, and one in three (34.7%) have attended at least some college.  Over half, (56.7%) live in households receiving all of their income from low-wage jobs.

“You cannot survive on $8.25 an hour,” said Silvia Torres member of Brighton Park Neighborhood Council and resident of the 15th ward. “Allowing highly profitable companies to pay poverty wages is an issue for the whole community. Poverty leads to violence.  Therefore, we can’t afford to not raise the minimum wage to $15.”