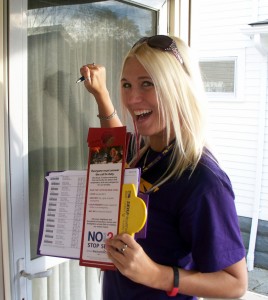 Members knocked knocked on almost 7000 doors in a week to educate Ohio voters about SB5. Their efforts helped the bill to be repealed!

Unlike Wisconsin’s, Ohio’s constitution allows for a citizen’s veto, giving residents a chance to bring a bad bill to a ballot–if they can gather enough signatures.

With help from fifteen of our members, organizers gathered 1.3 million signatures, giving voters the opportunity to send the message that working people aren’t going to accept attacks on our bargaining rights.

“These Republican governors all over the country are trying to cut out the middle class. We want the whole country to see what’s going on and say, enough is enough,” said McKinley Williams, a groundskeeper at Methodist Hospital in Gary, IN who spent a week in Cleveland knocking on doors to educate residents about the devastating impact of SB5.

“I met a lot of people in the area whose lives would have been immediately affected by this bill–teachers, state workers, city workers, and more,” said Ella Giles, a home care worker in St. Louis. “But even most of the people who weren’t going to be affected right away were on our side, because people know that once they start chipping away at working people, it’s only a matter of time before they start chipping away at you.”

Excluding Election Day, Williams, Giles, and other members knocked on 6842 doors and had 2152 conversations with voters in just one week, getting support from more than 90% of them and leading 61% of Ohio voters to repeal the bad bill. As Gov. Walker’s recall heats up in Wisconsin, this victory not only protects good jobs for thousands of Ohio residents, but will have a real impact on our efforts to protect bargaining rights for working people all over the United States.

“The most recent polls show that the majority of people in Wisconsin want to recall Scott Walker,” McKinley said. “I’m fired up and ready to go to Wisconsin next!”